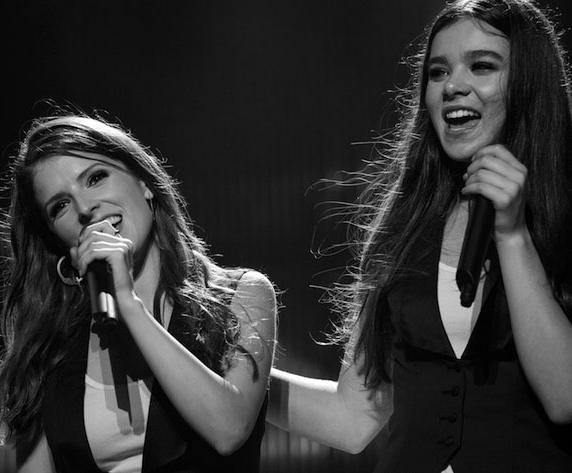 A photograph from the new "Pitch Perfect" movie

Bible-inspired action movie was released just in time for Christmas. Although this movie is based upon the story of Moses and his brother, Ramses, it contains elements of action and dramatic scenes that can attract a diverse audience. The plot revolves around Moses fulfilling his mission from God and the battles he has to fight in order to free the Israelites from slavery that are under the jurisdiction of Ramses.

“[I’ve heard that “Exodus”] is about how Moses frees the Jewish people from the Egyptians,” freshman Dakshesh Nimishe said. “[I want to see this movie] because it seems awesome.”

The third installment of “The Hobbit” stars Martin Freeman, Ian McKellen and Richard Armitage. This gripping adventure follows the story of Bilbo Baggins and the dwarves after they fail to regain the Arkenstone and the dragon, Smaug, escapes the mountain to set ablaze to Lake-town. This movie is predicted to bring many Hobbit and Lord of the Rings fans into the theater, but may also draw people who enjoy a fantasy-adventure.

“I’ve always been scared of the hobbit because of Smeagol, but other than that it looks like a great movie and I’m excited to watch it,” sophomore Yousef Panjshiri said.

This movie will show the partnership between the elves and the dwarves as they attempt to defeat the army of Sauron in battle. Creators of the movie have strived to make this a film a major visual experience.

The second remake of the musical “Annie” stars Quvenzhane Wallis, Jamie Foxx and Cameron Diaz. This heartwarming tale mixes the original charm of “Annie” with modern aspects of today’s society such as African American culture, inclusion of new technology and new social media within the plot. It will include music that many generations have come to know and love; people can expect the whole theater to be singing along.

“When I see the trailer for Annie it makes me want to sing along, so I do want to see it,” junior Noor Takieddin said.

Everybody knows the story of Cinderella, and Disney is bringing this classic story to life once again. Lilly James, Richard Madden, and Cate Blanchett are the actors portraying Cinderella, Prince Charming, and the evil stepmother. Many Disney princess fans throughout the school are raving about this release.

“I’m so excited,” sophomore Ally O’Brien said. “I think they’ll try to capture the original Cinderella’s essence in it.”

The charm of Cinderella is expected to be a major blockbuster.

Avengers 2: Age of Ultron May 1

The second installment of Marvel’s “Avengers” movie series stars Robert Downey Jr., Chris Evans and James Spader as their iconic characters. After the experimental creation of Ultron, a highly intelligent robot, goes bad, all of the Avengers become threatened by Ultron, who is out to create chaos and attempt to destroy mankind.

“Avengers 2” introduces many new Marvel characters that are already well-known to the public. Because of this, students can expect a large crowd to be flocking the theaters once the movie releases.

“I am very excited [for Avengers 2] because it seems like a great movie,” Panjshiri said. “I love watching all of the Marvel characters in action.”

“Pitch Perfect 2” stars Anna Kendrick, Rebel Wilson and Brittany Snow. In this sequel, the Barden Bellas enter an international acapella competition. Directors and producers use the blend of music and comedy in hopes to make the film very enjoyable. The first Pitch Perfect movie is still being talked about today, as it was extremely popular among students. Aside from the music, many people connect with the stories of each of the characters. The first Pitch Perfect was very popular; the new movie is expected to appeal to a wide audience as well.

“[I’m excited for] Pitch Perfect, I watched the trailer and it looked really exciting,” Takieddin said. “I’m really excited to see it because you get to see how they’ve all changed from college to their further years.”

The “Star Wars” reboot stars John Boyega, Daisy Ridley and Adam Driver. Many fans are wary about this edition to the Star Wars series since it’s being taken over by Disney and a new director. Even though the production of this movie has been very secretive, a trailer was released over Thanksgiving break, sparking much interest in this film and generating questions about the storyline.

By reading the title “The Force Awakens,” one can assume that this movie will introduce the battle between light and dark once again; a popular theme within the series.

“[I want to see] Star Wars Episode 7 because the entire Star Wars series was great and I want to see if they’re going to ruin it or make it amazing,” sophomore Samir Elokdah said.