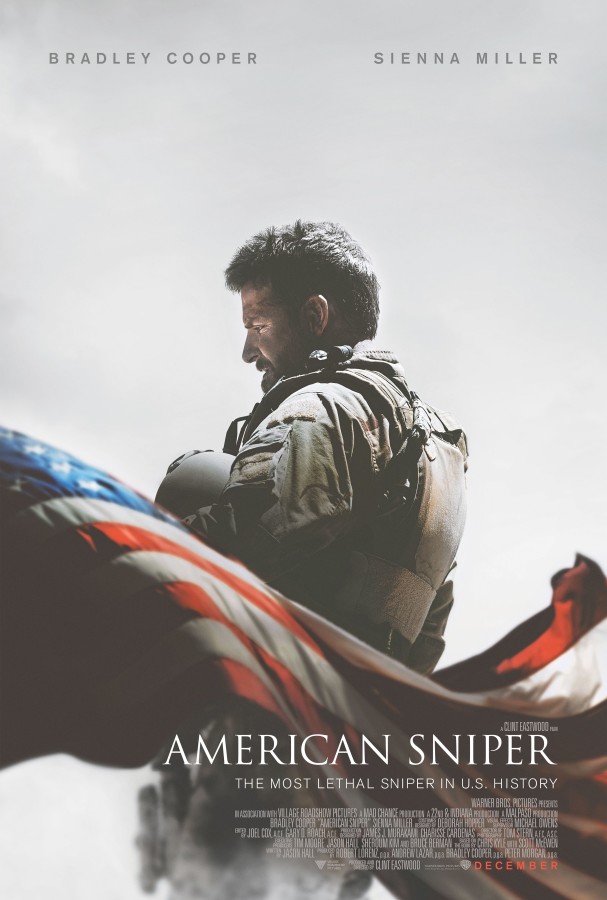 A poster for the movie

We had both heard of this movie before it came out, but didn’t think much of it. We weren’t huge action movie fans and this film seemed a little too intense for our liking. However, once it was released, we heard many topics of interest that surrounded this movie. There were many things that people were upset about in this movie; even the fact that they used a doll instead of a real baby in some scenes. However, the more prominent controversies were sparked from people’s claims that this movie was propaganda and promotes Islamophobia. This idea was encouraged by social media, as famous people, such as Seth Rogen and Michael Moore, tweeted their opinions while many others joined in the conversation. We decided to see the movie ourselves to address the apparent controversies, and that led us to develop different opinions about the film “American Sniper.”

My heart began to pound at the beginning of the movie, as my dad and I were the only Muslims present in the theater. “God is [the] greatest, God is [the] greatest,” the movie begins with the Islamic call to prayer. Heavy breathing, heart rate pumping, Chris Kyle, a NAVY Seal sharp shooter positioned in Iraq, aims his sniper at a young veiled women and her child carrying a grenade. Boom. His aim is perfect.

Chris Kyle is known to be a legend as he has a record of 160 kills using the sniper rifle, which is the most lethal weapon in US history, according to CNN. He sacrificed all that he had, including time spent with his family, to protect our country and fight terrorist extremists. Going back and forth to Iraq (four tours) caused a tremendous amount of emotional depression for him as well as for his family to see how the effects of war changed him as a person. Most importantly, his soldier hood and servitude towards our country allows for us to be proud and grateful. To see what our soldiers experience in order to protect this country, heavily frightened me. Never would I have thought that the men and women that go into war, face challenges that can leave them mentally distressed.

Although this movie was truly inspirational and patriotic, I couldn’t help but think about the small aspects of Islamophobia that it portrayed. I was very disturbed to see that all of the Muslims in the movie were portrayed as horrible people with no souls. Almost every Muslim was shown as a traitor to the U.S. soldiers, many Muslim families’ homes were invaded, while families were captured, or even held accountable if they were not able to assist the soldiers.

Many times during the movie, I had to shut my eyes. Horrifying scenes and the continuous sound of gunshots made me very upset. At times I felt very awkward and out of place and thought to myself, this is not what my religion has taught me.

Overall, this movie allowed for me to realize that Chris Kyle as well as the soldiers of our country suffer and experience traumatic challenges to ensure our safety. At the same time, it was hard for me to digest to the fact that the Muslim characters in the movie have been viewed as detrimental.

I definitely believe that all of our hardworking soldiers are heroes, but I also think it’s important to educate ourselves and consider the different points of view and circumstances of a situation before generalizing an entire religion or culture.

When the movie ended, the whole theater was dead silent. It took a couple of minutes for everyone to stand up and start leaving, and even then, no one was talking. I could tell that this movie had deeply affected everyone, but I cannot speak for what was going on in everyone else’s minds, just my own. I was completely horrified by that movie. Not being one to lean towards actions in the first place, I was incredibly shaken after watching “American Sniper.”  Although I can understand people who claim that the movie promotes Islamophobia, that is not the idea that it left imprinted on me as I left the theater. To me, this movie illustrated the horrifying truth and effects of war. In the film, there were many close calls that the main character, sniper Chris Kyle, had to make. This movie was filled with gore among other things; it is not one for the faint of heart. There were terrifying scenes of torture and the deaths of women and children. All of these things left a sick feeling in my stomach. I had never thought about all of the details of war before, only that there are wars going on. The graphic illustration of war in “American Sniper” made me think twice about what I take for granted.

Throughout the movie, Chris Kyle’s character claims that he does his job to keep the bad guys away and to keep his family and his country safe. His job was terrifying, so I have no idea how anyone could suggest that he was a coward. He saved the lives of many of his comrades in battle by being their “overwatch.”

Although this movie shows the heroic actions of Chris Kyle, it also shows the devastating toll that the war took on his life. This portrayal of Chris Kyle’s feelings in the movie, however, may not line up with the feelings of the actual sniper Chris Kyle. In this movie, there was a good balance between showing the war and Chris Kyle’s life, as it would go back and forth from his tours and his time at home.

Once he returned from his tours, he was a changed person. He suffered from symptoms of PTSD and it upset his wife to watch him act differently than the man she had fallen in love with. He eventually began working with veterans as a way of healing himself mentally and helping others. This, to me, just further shows the horrifying effects that war can have on people, and I think that was the purpose of this movie. I can see why people would be offended by some of the content in this movie, but in my opinion, the main idea was to show how damaging war can be and what our soldiers go through every day.

The above article represents the experiences of two staff members. However, overall, the staff agrees that this movie has content which can be controversial, and can be the topic of an educated discussion. It’s important to know that there will always be opposing viewpoints in any major discussion and no one should put another down for his or her opinions. We agreed that Chris Kyle is an American war hero, whose efforts are invaluable to the lives of many soldiers. Students who are interested in this film should take the time to learn about the discrepancy between the real life of Chris Kyle and the character portrayed in the movie. This movie revolves around the execution of many terrorists in Iraq. When watching this movie, keep in mind the situation of focuses on extremists, and not all Muslims are horrible people. We believe the purpose of this movie was to reflect upon the lives of soldiers affected by war, and that many terrorists in Iraq are Muslim, but this minority does not deserve to be stereotyped as a whole because of this.