Reflecting on the Importance of Veterans 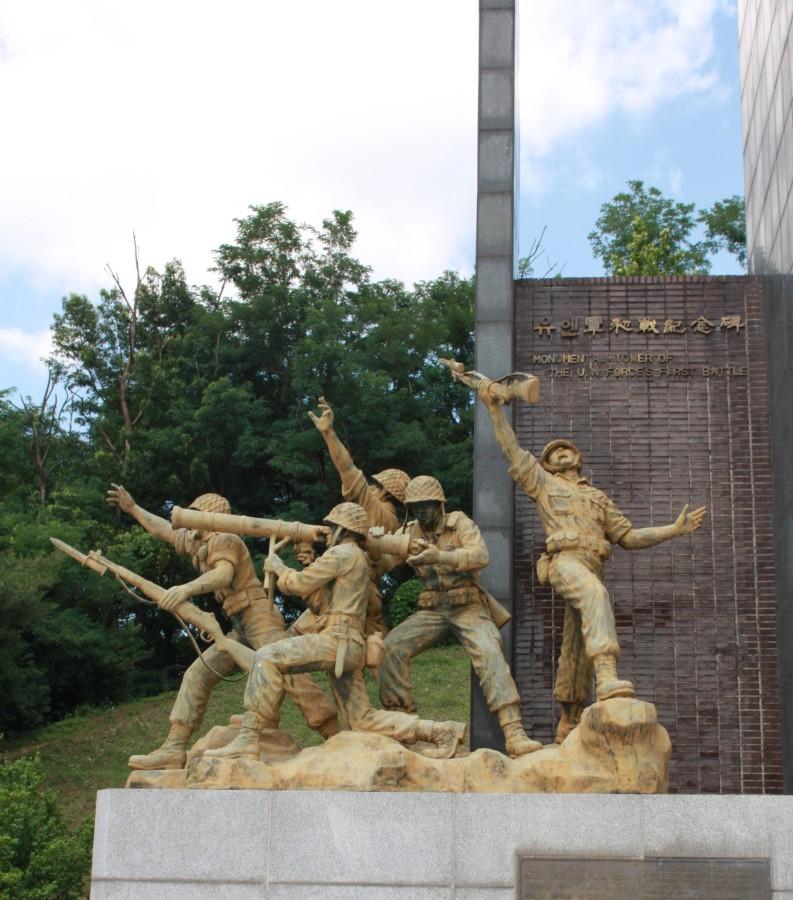 Step and crunch, step and splash, step and fall, pause and sit down for five minutes for a break and a navigation check, step and find a small Korean village, step and look up to see a memorial dedicated to servicemen who fought the North Korean army for the first time. This is the experience of hiking the Task Force Smith Trail in South Korea. For 11 miles, those who travel this historic trail have time to reflect on the sacrifices made by Task Force Smith.

While living on Osan Air Force Base, I saw people who risked their lives for the country every day. My dad has been “shot in the head” more than twice because he was the commander of a squadron and during a military exercise. He had to “die” so that the squadron could continue to work without the commander there calling the shots. As scary as this sounds, this exercise is just a simulation. Many of these simulations are week-long events through which the military tests how soldiers operate under duress. Living in the Republic of Korea from 2011-2013, with Kim Jong-un just coming to power and testing how far the United States is willing to go, there was always a threat of being attacked. Everyone on base, families included, had to practice drills every so often and be ready to evacuate if ever needed.

On the base, there was always an assumption that missiles were locked on to our location. That is why we were always so nervous about evacuations and getting ready to move. After spending more than half of my 15 years on military bases overseas, I have had lots of time to think about what a veteran is to me and how they have affected my life.

When Veterans Day comes around on Wednesday, Nov. 11, think about all of the men and women who sacrifice themselves every day to protect the freedoms that Americans often take for granted. While many people will brush it off as just another Wednesday, we should all stop and thank all of the brave people who dedicate their lives for their country and those who live in it.

When some people think about veterans, they think about big buff men with guns in their hands fighting off terrorists. While that may be true for a small portion of the military, many don’t think about the fact that servicemen have a family, some have spouses and children waiting for them at home. Many have seen the Duracell commercial in which a serviceman sends a teddy bear to his daughter so that she can feel like she is there with him. Things like that happen all the time in the military.

I can picture the time when my dad came home from the Middle East for two days and then had to immediately leave for additional training. All the time, people forget that these servicemen and women are people too. They have families and friends as well as other people who know and love them. My dad wasn’t home for much of the first four years of my life because he was serving his country and fighting to keep other families alive.

My dad has told me many stories about his time in the Middle East. In one of the most memorable of these, he saved soldiers’ lives by flying a cargo plane over the skirmish. When the terrorists heard the plane, they scrambled away because they thought a bombing run was coming through. To me, my dad is an everyday hero and so are other veterans.

Although my dad was away for most of my childhood, the memories I have of him are my most vivid. I cherished those times, and although I didn’t fully appreciate his sacrifices then, I do now. While I remember things like snowball fights with neighbors, I also remember the many times I said “Mom, where’s Dad?” or “I miss Dad,” or even, “When is Dad getting home?”

Everyday heroes like my father are some of the bravest. They are the ones who may be forgotten in time, like those who rose the flag first on Iwo Jima. For me, these are the people whose legacies carry on. These are the people we should be thankful for on Veterans Day.

With teachers like Wayne Wolfersberger, a substitute teacher who served during the Vietnam War, walking around the school, people should really stop and think about everyone who has made sacrifices for America. A veteran, by definition, is a person who has served in the military, yet everyone defines it in their own way.

“[A veteran] is someone who dedicated themselves to America’s ideals and freedoms,” junior Gabe Ott said.

A definition from any two people will be different because they have grown up with different experiences in relation to the word. Regardless of your experiences, start reflecting on our veterans, what they mean in America’s history and how they influence our lives.