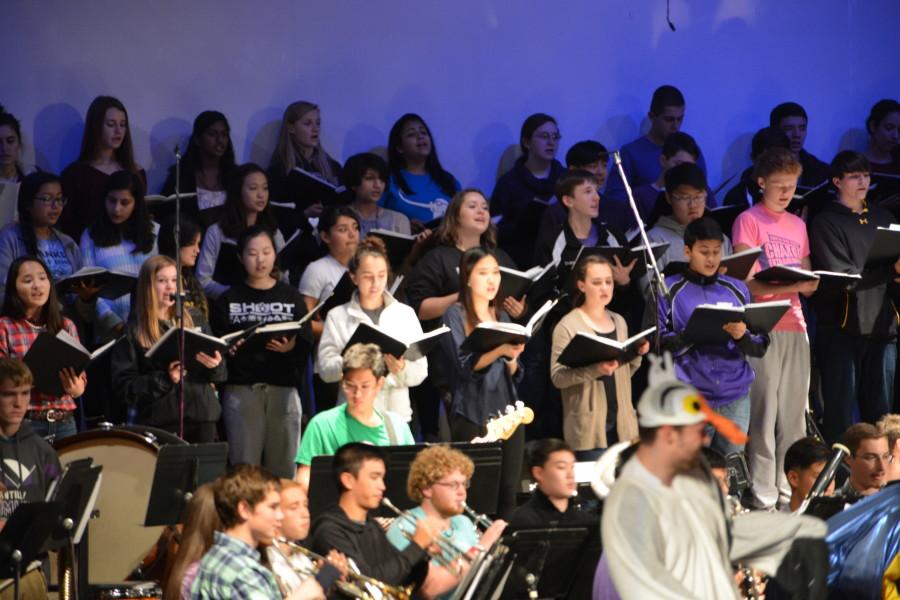 The delicate snow will soon start to pile up on grass in front of houses, but the holiday season is already in full swing in the halls of Chantilly. While many classes will brush over the season for giving, the performing arts department has been preparing for Holiday Spectacular since early November. The performers are getting ready to put on a show for toddlers, students and the rest of the community.

“The Holiday Spectacular is a tradition that has been going on for over 25 years at Chantilly High School and is a collaboration between the entire performing arts,” drama teacher  Shannon Khatcheressian said. “So theater, band, choir and orchestra students all get together to create a performance that helps bring in the holiday season.”

The show consists of orchestra and band playing pieces such as “It’s The Most Wonderful Time Of The Year” and “A Place In The Heart”, with choir singing the song like “Lully Lulla Lullay” and “We Are Lights”, while theater performs on the stage to a few of the pieces such as “Cowboy Christmas” and “Zat You, Santa Claus”..

The annual Holiday Spectacular serves as a way to bring the community together each year. In addition to putting on the night performances, performers also do the Tiny Tots show for young children, complete with an appearance from Santa Claus.

“[Students] in all of our classes came to [the Holiday Spectacular] when they were little,” drama teacher Ed Monk said.

Because of rehearsals for the fall musical “Annie,” the drama department did not have much time to prepare for Holiday Spectacular. One unique aspect about the December show is that the drama students must incorporate pantomime during the songs.

“We go out and begin to create a scene from scratch that matches the music,” sophomore and Drama II student Isaac Thornton said. “After the scene is approved by the teacher, we begin to hammer out and really polish the scene. After that, we hit dress rehearsals, where we perfect our lines and entrances and know our scene perfectly, and adjust our scene to fit with the band and choir members.”

The audience’s understanding of the show rests on the choir’s ability to sing their songs well. They sing songs of varied length, and some of them are so long that they tell a story.

“The program always includes a couple of songs that are just for the choir,” sophomore and Chamber Chorale singer Arden Titus said. “Chorus spends the most time standing during the show. Sometimes it’s hard to stand still for an entire song, especially if it’s a really long song like ‘Twas the Night’ or ‘How the Grinch Stole Christmas.’”

On the band side, junior and tenor saxophone player Cory Carter was extremely influential in choosing and arranging pieces. He came up with the idea to use the song “Zat You, Santa Claus?” Then, with band director Chris Singleton’s approval, Carter arranged it for the holiday performance.

“[The] band will be performing eight pieces,” sophomore and percussion player Brian Tan said. “We got them right after the fall concert, and we prepare the pieces during band class. Some of those pieces will be performed in conjunction with the Chantilly Jazz program.”

Orchestra has a unique place in the show. Rather than sitting on the stage while they perform, the orchestra will stand up in any open spots in the aisles because the stage is already occupied. They perform two songs during the show..

“The orchestra tends to perform standing in the isle,” orchestra director Aaron Mynes said.” We’re not in our usually consert arrangement onstage.”

The Holiday Spectacular will be held Dec. 10 and Dec. 11 at 7 p.m. Tickets are available for $10 online and $12 at the door. Come to see the show to support your fellow chargers.