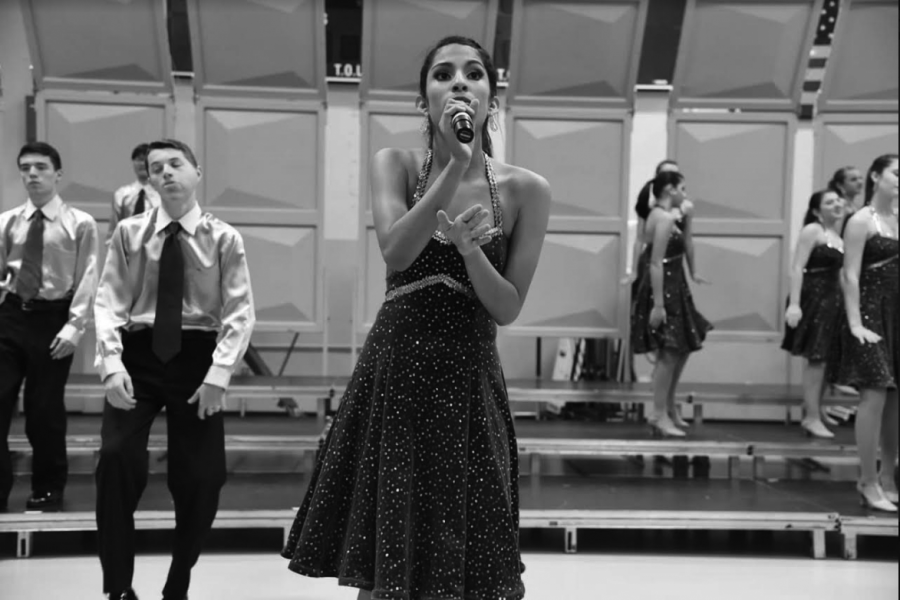 For many, music is a pastime- a quick form of entertainment to take their minds off the daily stresses of life. But for others, music is a passion- a form of art they continuously strive to become better at. Many students have pursued their interests actively instead of waiting to find success. They have recorded covers, created original music, formed their own bands and performed on a variety of musical stages.

Junior Leena Takiedden has dreamed of becoming an acclaimed singer since she was three years old.

“It’s all I’ve ever known. I’ve always been singing and performing for my family,” Takiedden said. “It’s become a passion of mine and almost a habit.”

The aspiring musician has perfected her skill by performing in the school musical, “Annie,” as well as self-releasing a single, “Mad About You,” on Spotify, Google Play and iTunes.

“It’s a song I wrote and recorded all by myself,” Takiedden said. “Little did I know that the song would reach an international audience including Brazil, Sweden, Canada and Turkey.”

Despite her continuous practice, Takiedden understands that she has a long journey in front of her.

“As of now, my plans for the future are to just keep learning and to improve my musical abilities,” Takiedden said. “I have much more to understand and adapt to, so I’m being patient with the process.”

Nonetheless, this has not stopped her from having ambitious goals and dreaming big.

“I’d love to sell out arenas or win a Grammy [Award],” Takiedden said. “But as long as I can continue creating music and sharing it with my dear ones, I’ll be satisfied and beyond blessed.”

Sophomore Rocio Hernandez is an active member of the choir program and has found ways to expand her musical talent through the opportunities it offers.

“I performed in our ‘Choir Cabaret,’ in which I sang a song for friends and family. I was in last year’s ‘Jazz and Pizzazz’ and was in two group solos,” Hernandez said. “This year I had a solo in our pyramid and fall concert.”

In the upcoming months, she hopes to participate in school-sponsored talent shows. Although Hernandez does not want to pursue a music degree at the college level, she does hope to continue her enthusiasm for the art form.

“Music has been a passion of mine since I was little,” Hernandez said. “Singing is a great way to express myself.”

Hernandez’s biggest musical inspiration is her mother, who was diagnosed with cancer in her throat in 2011.

“After her surgery, during chemotherapy, she’d sing with me as a way to make me feel better,” Hernandez said. “I learned new songs in Spanish, her native language, to make her feel better when she was feeling down.”

Her mother is in recovery now, and they enjoy bonding over their shared passion for music.

“We sing songs together all the time now,” Hernandez said. “We both share that same love for music.”

Other student singers, like senior Chloe Ramich, do not feel like they fit into school-sponsored music programs, and have found time to pursue independent ventures.

“I had my fair share of chorus classes but I never seemed to fit what they needed, so I branched off and did my own thing,” Ramich said.

Ramich takes part in a wide variety of programs of programs that allow her to showcase her talent.

“I’m a worship leader at Floris United Methodist Church, where I often play piano and sing,” Ramich said. “I do open mic nights at my church and sing at the luminaria ceremony during Relay for Life.”

Sometimes Ramich feels her stage fright has gotten the better of her.

“I have participated in talent shows, but they didn’t go too well,” Ramich said. “I get nervous and shaky, and it’s only been about a year since I’ve gotten over that. It’s a slow but steady transformation to being confident in my music.”

Ramich has written about 15 songs, one of which, “Stay,” was released on iTunes last December. She has a YouTube channel and posts recordings of her covers.

Ramich draws inspiration from artists like Tyler Ward and Bea Miller, and hopes to find success like them. She understands that music can be impactful no matter how large your musical influence is.

“If only one person in the crowd is moved by your music, it still [makes the same impact as] moving hundreds,” Ramich said.

Senior Thomas Allain has found his musical niche, not as a solo artist, but by collaborating with other student musicians.

“Outside of school, when I can find the time, I love playing with my jazz combo. We call ourselves ‘The Pocket,’” Allain said.

“It’s a wonderful outlet consisting of people who have a wide variety of tastes and a serious passion,” Allain said. “Not to mention, they’ll sit through my singing.”

Unlike many other musicians, Allain did not find his talent for music at an early age.

“My parents pushed me to take piano lessons, despite my complaining,” Allain said. “I really owe my love for making music to them.”

Allain has participated in multiple school-sponsored musical events, including “Coffee House” and “Jazz and Pizzazz.” Outside of school, Allain has performed in fundraising and charity concerts.

“With this year bringing me my last opportunities to perform as a student, I can guarantee my name will be on the December ‘Coffee House’ audition list and hopefully a Chantilly ‘Talent Show’ list,” Allain said.

Allain brings his love of music not only to concerts and performances, but also wherever he goes.

“At family visits or get-togethers, it always feels good to be able to entertain my aunts and uncles,” Allain said. “[I love to] put a smile on my grandmother’s face by playing her favorite John Lennon song.”

Allain also hopes to bring this passion to whichever college he attends next year.

“I plan on taking music classes in college, possibly a music minor if the college I go to offers this,” Allain said. “I [also] plan on being in the cliché college garage band.”

Whatever the future has in store, Allain knows that music will always be with him.

“Whether it’s letting loose on the piano with my jazz friends, or singing with my guitar at a cross country get-together, I love being able to kick back and do something I and other people love,” Allain said.