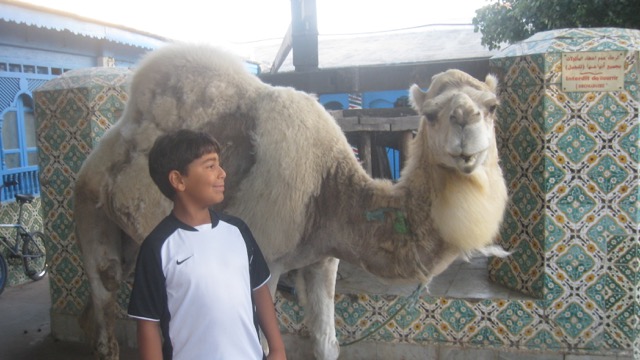 Senior Salah-Dean Satouri interacts with a camel in the small tourist town, Hammamet, just outside the capitol, Tunis,.

Before 2011, people in the West would not be able to find Tunisia on a map, let alone recognize it as a country. This ignorance would change when Tunisia made headlines with the emergence of the Arab independence movement, the Arab Spring, which overtook the Middle East. Tunisia is my homeland, and each summer my family and I take the 10-hour plane trip to visit our relatives. These trips are the only time I see my grandparents, as they are deterred by the economic and physical hardships that are associated with the flight to the United States. I look forward to this experience every year, but in the summer of 2011, we skipped our trip. When I asked my parents why we didn’t get to go, they responded, “We can’t go this year. Just wait until next year.” My confusion increased that December when my father took a trip to Tunisia without us. My mom explained to my sister and I that the Arab Spring had begun, placing Tunisia in a state of chaos; there were violent riots and protests filling the streets, making it dangerous for us to travel there.

While I was stuck at home, the people of Tunisia were risking their lives to overthrow dictator Ben Ali and to create a democratic state. As the next summer approached, I was excited to see my grandparents, and I was sure that the country was going to blossom with the freedom I had associated with democracy. However, these images quickly vanished when I arrived in Tunisia; the familiar beaches were filled with trash, every wall was graffitied, buildings were covered with political posters, the main road intersections were manned by armed guards and the streets once filled with tourists were empty and somber. Tunisians lived with a sense of uncertainty and fear that came with such uncharted territory. My trip left me wondering how a country could change so dramatically in a year. I returned home thinking that the country had regressed, but with each subsequent visit, I noticed significant progress; roads were being cleaned and buildings were being built, but the most significant difference was seen with the people. They weren’t afraid to be outside anymore, and were filling the air with sounds of hope. The country was becoming the free society I had known from living in the United States.

Being a part of two worlds has given me a unique perspective on democracy. I know the difference a democratic government can make. To this date, Tunisia is the only surviving democracy after the Arab Spring. The country did this by enacting one of the most liberal and secular constitutions in the Middle East, arguably becoming the most open Muslim majority country. The Middle East remains a region in which countries are not able to embrace democracy and have historically fallen to authoritarian and tyrannical regimes. This is due, in part, to the Islamist ideology, which is unwilling to secularize the government and separate the Quran from policy. As a surviving democracy, Tunisia rejected the fundamentalist mentality of Sharia law, and the ruling party of Tunisia, Ennahda, strayed away from a religious foundation to build a secular constitution.

Historically, traditional ideology hasn’t fared well when attempting to set up democratic governments. It isn’t easy to set up a democratic government. The aforementioned Arab Spring saw revolutions in Egypt, Libya, Bahrain, Syria, Oman, Algeria and Morocco. Most of these countries have devolved back to forms of autocratic government or states of anarchy through the ineffectiveness of interim governments, which have been harmful to the people of these countries. Many factors have played into this devolution, but the major issue that has been cited is the fundamentalist ideology upon which these new governments were built.

The traditional Islamist ideology has an inherent contradiction with a liberal democracy, but not an inherent contradiction with democracy itself. Being Muslim myself, I understand the reluctance and hesitation of the Muslim community to evolve and progress, fearing it would dilute the fundamental core of the religion. The governments of these Muslim majority nations are looking to devolve back to the past, but as we have seen, governments that revert and are unwilling to adapt will fail, and those which look to the future are prospering. Solving this issue is more complex than simply signing in a piece of legislation or enacting policy. These growing governments must understand that separating Islamist principles from government doesn’t mean that the citizens will lose their religious fervor.

Western democratic principles evolved from the Enlightenment, which brought out the idea of separation of church and state. Islam never experienced such a movement, so the majority of Muslim governments assumed religious authority and became, in practice, theocracies. In the Western world, we cannot expect the importance of Islam in government to immediately wane. A government which uses Islamic principles is not inherently anti-democratic, as the two principles are not mutually exclusive. The main principle of democracy is to fundamentally be responsive to the voting public, and if the voting public sees Islam as a key principle, then Islam will continue to be found in government. But if the government’s founding principles are created upon a platform of religion, progress will be limited. To truly make the Middle East more democratic, there must be a secular voice among the fundamentalist noise.