More extracurriculars should be gender neutral 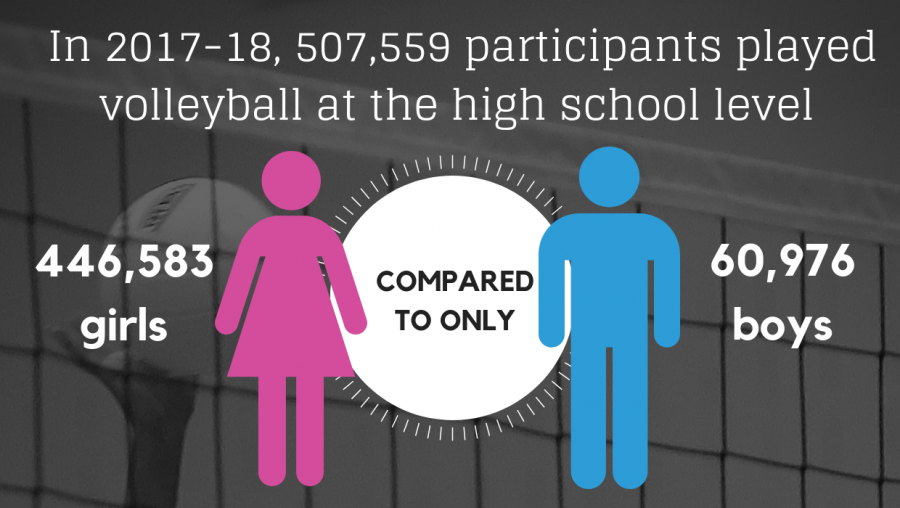 The school provides a wide array of opportunities for students to participate in, such as volleyball, wrestling and color guard; however, some activities are not perfectly inclusive. Those who choose to pursue extracurriculars dominated by the opposite sex may come across some issues. For example, boys who want to play volleyball for the school don’t have the opportunity to do so; there is no boys’ volleyball team.

According to the website Athletic Business, only 22 National Collegiate Athletic Association (NCAA) member institutions sponsor Division I men’s volleyball, while 332 sponsor Division I women’s volleyball. The general notion that volleyball is a girls’ sport prevents the rise of male participation. The Virginia High School League (VHSL) Handbook and Policy Manual states that a school athletic program should “provide for the participation of a sufficient number of students to justify the funds used for its support.” Even if a boys’ volleyball team were to be created, it would need to have enough participants to rationalize the funding, and would need to maintain participation from year to year. It takes significant effort and financial support to establish a new team, so creating a boys’ team isn’t as easy as it sounds.

“I do think there should be [a boys’ volleyball team],” senior and captain of the varsity volleyball team Morgahn Fingall said. “But to compete with other schools as a fall sport, I don’t think Fairfax County or Chantilly has the resources or the official plan to set that up.”

It’s unfair to the boys that want to play volleyball to not have the same opportunity as girls. Why should gender stop a student from doing what he or she loves? These barriers defining what only boys or girls can do separate the genders even more. In order for a change to occur, boys have to declare their interests and establish the idea of a team for the school. Gender boundaries in sports can’t be broken without a voice to express different ideas. Even in sports that both genders can play, it takes courage and perseverance to participate. Junior Isabelle Sheard, for example, decided to pursue her interest in wrestling, even though her decision was met with disapproval.

“Some of the biggest opposition came from my mom, which was really hard on my self-esteem. It caused a really bad strain on our relationship, which is still healing today,” Sheard said. “My father isn’t really a big fan of it either, but he chooses to support whatever I do as long as I work hard at it.”

Joining a sport in which almost everyone is of the opposite sex can be intimidating. Although we are gradually moving past restrictive gender norms, societal expectations still surface and create bias.

“I used to get rejected a lot because guys didn’t want to wrestle a girl,” Sheard said. “So when you’re a girl trying to succeed in a place that doesn’t want you to do that, you have to be prepared to face rejection, because you’re going to face a lot of it.”

Girls aren’t the only ones breaking gender norms. Sophomore Donny Nguyen is excited about joining color guard, despite it being a female-dominated activity at Chantilly.

“I don’t mind that it’s dominantly a female sport because I think it’s for everyone,” Nguyen said. “It’s a place where anyone can learn how to perform and dance with flashy equipment and learn how to work together as a team.”

Although the school gives male students the opportunity to join color guard, social and gender expectations discourage the vast majority of boys from participating. Few male students have tried joining color guard in recent years, according to a color guard member.

“I just really want to break the stereotypical idea of only girls doing color guard,” Nguyen said. “I want guys to try new things instead of shying away and being afraid of getting teased.”

For those who are pursuing success in extracurriculars dominated by the opposite sex, it can be both a struggle and an adventure. It takes a lot of bravery to go against the social norm, but by doing so, you will be doing what you want, and not what others expect of you.

“Honestly, some of my best memories and experiences have come from wrestling. This sport helped build my confidence and allowed me to improve my skills as a mentor and leader,” Sheard said. “So here’s a small PSA: if any girls are interested but feel hesitant to join, I just want to tell them to come on over, and the team will welcome them with open arms. I will always be there to support them.”