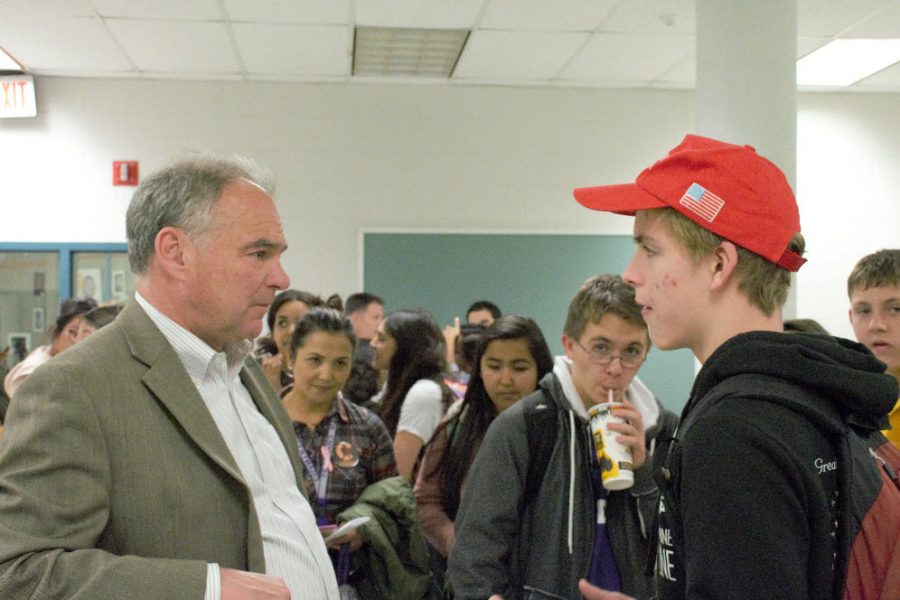 Senator Tim Kaine listens to a student's concerns while visiting Chantilly to speak and connect with the school community.

Oct. 25 marked the first time in recent Chantilly history that a serving member of the United States Senate came and visited the school.

At the beginning of the school year, social studies teacher Joe Clement invited midterm election candidates to come and speak in the lecture hall. Despite contacting numerous candidates running for the Senate and the House of Representatives in both the 10th and 11th Districts, Clement was only able to secure a handful of speakers, including Senator Tim Kaine, who ran as vice president to Hillary Clinton in the 2016 election.

“When I come back to school in the fall, one of the first things I do is email everybody that’s on the ballot,” Clement said. “This year, there were eight candidates around Chantilly. Some of them don’t reply and some of them can’t make it work with their schedule, but this year, we had four who could.”

The other three candidates who visited were Steven Porter, Jeff Dove and Matt Waters; however, the student turnout for Kaine’s visit was by far the largest. Many were impressed by his decision to come despite his high status.

“The fact that he’s the first [senator] to come here where the majority of people cannot vote shows that he cares about us and has a plan for the future,” senior Mitchell Davis said. “It establishes a sense of trustworthiness in him.”

Kaine was eager to visit the school and answer the attendees’ questions, as well as connect on a more personal level by staying to speak with them and pose for pictures.

“I was really excited to be invited to come to Chantilly,” Kaine said. “There were a number in the audience who were not eligible to vote, but I like talking to students.”

Because he is a member of the Education Committee in the Senate, Kaine has the opportunity to influence what education is like in the nation, giving him another connection to students on an administrative level.

“A lot of the work that I do is about our school systems from pre-K to college. I talk to young people and hear their concerns,” Kaine said. “The questions I’m hearing from students are not just about ‘Can I convince you to vote for me?’ They’re about helping me do my job better as a member of the Senate.”

Student journalists were given the opportunity to cover the event and sit down for an interview with Kaine afterward. As an executive producer of the broadcast program, Davis was able to take part in this process.

“I was honored to meet Kaine in person,” Davis said. “The entire time I was speaking to him, I was kind of getting over the shock.”

Regardless of political affiliation, it is often considered a privilege to come into contact with any member of Congress, and events such as this speaker series give students a better sense of who represents them in the government, as well as how much that person cares about his or her constituents.

Kaine made time to interact with the student body despite his prestigious role in the government, and his visit enabled many attendees to see him as less of a figurehead and more of a neighbor.

“We have these names come into our heads like Tim Kaine, Obama, Hillary Clinton, Trump; they carry weight with them,” Davis said. “It’s reassuring to know that at the end of the day, we’re all just people.”