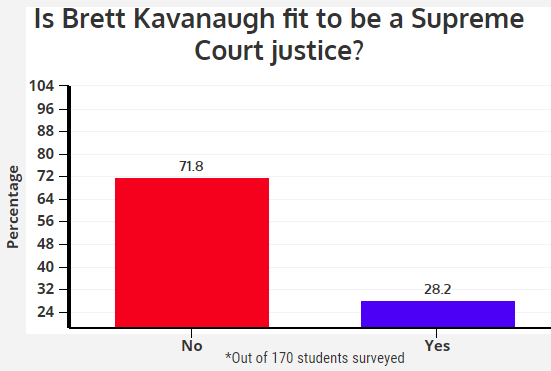 Brett Kavanaugh’s impassioned shouts echoed throughout the courtroom on Sept. 27, where Christine Blasey Ford announced in a shaky voice that she had been sexually assaulted by Kavanaugh over 30 years ago. The Supreme Court nominee delivered a heated testimony and maintained that he had never sexually assaulted Ford.

President Donald Trump wholeheartedly endorsed Kavanaugh despite the controversy surrounding his nomination, even going so far as to accuse Ford of voicing allegations due to partisan beliefs. After a presidential order for a limited seven-day FBI investigation resulted in no concrete evidence to support Ford’s testimony, Kavanaugh’s supporters rejoiced at the findings. There would be no punishment, no repercussions, nothing. Kavanaugh would be elected as the next Supreme Court justice, a part of the highest court in the nation.

Ford’s testimony came across as calm and collected as she recollected the alleged tragic events that had traumatized her over 30 years ago. Kavanaugh, on the other hand, lashed out at Democrats in his comments, even going so far as to call the allegations an “orchestrated political hit.” Furthermore, he resorted to the Trump Administration’s old standby: condemning the Clintons and stating that the whole trial was simply “revenge on behalf of the Clintons.”

The trial was a way for Republicans to confirm their boundless power, as they conducted the hearing with predetermined notions. With the President’s harsh rhetoric on their side, they had already decided on the outcome prior to the hearing. The seven-day limited investigation was ridiculously inadequate, setting an unrealistic timeline on the most important aspect of Kavanaugh’s nomination.

“I think that the trial was a joke, especially when you consider that it was literally a job interview,” senior Leah Tyrrell said. “He was temperamental, rude and refusing to answer questions, yet he is a judge in the Supreme Court now.”

Ford was degraded in the courtroom and on partisan channels such as Fox News, gaining nothing but angry tweets from Republicans that believed that Ford had solely partisan intentions. Her family has continued to receive death threats, she had to move four times during the course of the trial, she has to pay for private security, and she has been unable to return to her job at Palo Alto University.

In addition, the response from several conservative officials questioning why she had waited so long to come forward reflected the oblivious nature of the leaders in this nation. Many women wait decades to come forward, gathering the courage to speak about their tragic situations. Most fear a tarnished reputation, or a bout of victim blaming, which is exactly what Ford suffered. The men in power dishonored Ford by refusing to validate her opinions and her experience.

“Kavanaugh’s confirmation shows us that we consistently don’t believe survivors of sexual assault,” senior Katie Gallagher said. ”His confirmation clearly shows that if you allegedly sexually assault someone, it won’t matter, as people will believe you over the alleged victim.Victim blaming is a huge problem here, and people in power aren’t usually held responsible for their actions.”

However, several conservatives voiced the opinion that since the FBI did not gather evidence that corroborated Ford’s testimony, Democrats were unnecessarily bringing this issue up as a way to delay the process. Nevertheless,, stepping away from the allegations and the controversy surrounding the marred events three decades ago, Kavanaugh’s temperament at the hearing brought up serious questions about his capability to serve on the Supreme Court.

“Regardless of whether or not the allegations were true, Kavanaugh wasn’t able to keep his composure during the testimony. As a justice there will be personal opinions he has, but voicing those isn’t his job,” Gallagher said. “He’s supposed to interpret the Constitution and put his beliefs aside, and in his testimony he showed that he couldn’t do this. He is clearly unfit to serve for life on the Supreme Court.”

Supreme Court justices, judges serving on the highest court in the nation, should be able to maintain self-control and approach cases with fair mindsets. To see this new judge vehemently deny the allegations and become a red-faced menace attacking Democrats was a discouraging sight to many Americans.

“Kavanaugh’s election is absolutely disheartening and disgusting. The Supreme Court is supposed to be the one branch of government that’s unbiased; it’s not a partisan institution,” Tyrrell said. “It’s reserved for good people, good judges who have good temperaments and good personalities; Kavanagh is not one of them.”

This situation, which set a poor example for all Americans, reflects on the dangerous dominance of partisanship in the areas of the government that are supposed to remain impartial. Although no evidence surrounded the allegations, the seriousness of the accusations and Kavanaugh’s temperament should have called for immediate disqualification from the race. The Republicans had a plethora of potential candidates, but continued to push for Kavanaugh despite the controversy. The hubris and childish adamancy displayed by the Republican leaders highlighted the pathetic nature of modern American politics. Over the past 20 years, only 2-10% of allegations have been proven false. To enter the trial with preconceived opinions about Ford’s claims was unfair and did a dishonor to her courage and choice to voice her tragedy. This whole trial was conducted as a staged operation to brag about the power of the current leaders, and it was a pitiful response to the gravity of sexual assault survivors in America.