Migrant caravan sparks debate among students and across nation 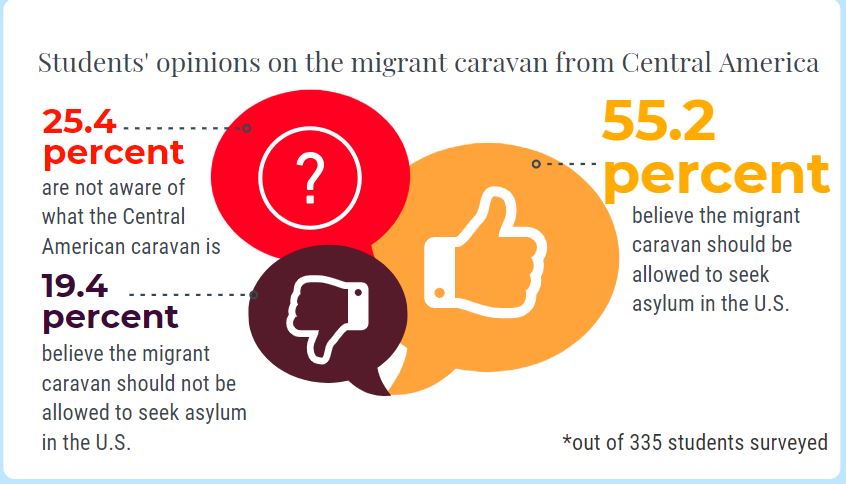 The highly controversial migrant caravan from Central America has received widespread attention not only from American politicians and news networks, but also international organizations like the United Nations. According to BBC News, this migrant caravan is composed of over 7,000 Central Americans, primarily from Honduras, and is by far the largest caravan to journey to the United States. The long trek of over 2,500 miles began in October, and now the majority of the caravan has reached the southern border of the country, seeking asylum from their home countries experiencing extreme poverty and violence.

“The reason why they’re coming here is to flee conditions which are very bad, some of which our country has been involved in,” senior Jack Zielinski said. “Our country has a long history of being involved in coups and drug wars in South America.”

However, the current administration has been pressing to keep the caravan out of the country, winning the support of many in the nation who are fearful of these immigrants.

Despite the U.S. government’s opposition, the caravan has continued its journey and is currently stopped in Tijuana, Mexico. President Donald Trump has stated in several tweets that under no conditions will the asylum-seekers be let in, and they are waiting at the border for an immigration court hearing.

“Asylum is legal under international law and United States law, so legally they’re able to do that,” junior Yifan Chen said. “The United States is supposed to be a beacon of opportunity and new life, and you can’t have it both ways where you want to maintain that reputation but then also turn away the exact people who fuel that reputation.”

Due to the challenges faced, many migrants have decided to either remain in Mexico and seek asylum there or return to their home countries. This means leaving the dilemma in the hands of Mexico’s newly inaugurated president, Andrés Manuel López Obrador, and the Mexican government. Both worked together to provide a temporary shelter for the caravan until Dec. 3, when it was shut down due to unsanitary conditions causing health risks.

On Nov. 25, U.S. Border Patrol agents launched tear gas into the incoming crowd of migrants; this action was criticized by some and supported by others for differing reasons.

“While I don’t think you should be using tear gas on children, because especially for younger people, tear gas can actually be deadly, at the same time, the conditions looked relatively unsafe,” Zielinski said. “I can see why there would be an argument that it ended up being for [the border patrol’s] own safety rather than just an attack.”

Others disagree with the decision, and people on both sides of the political spectrum have speculated that politicians brought the caravan into the limelight to use to their advantage at the polls in November.

While it remains to be seen what will happen to members of the caravan, it seems the issue will continue to divide the country for the foreseeable future.