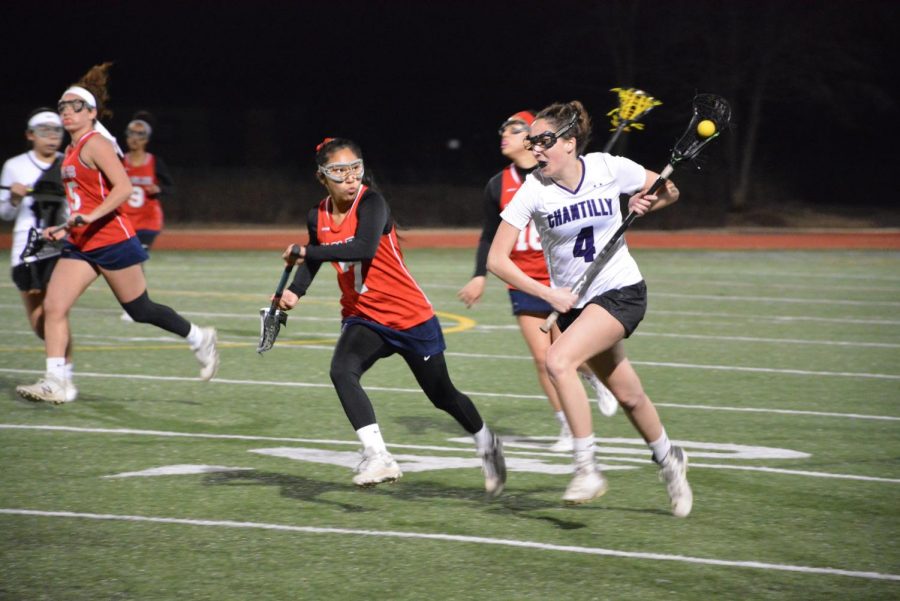 Senior and captain Katie Carita advances the ball down the field during the March 12 home game against Thomas Edison. The team managed its first win of the season, ending the game with a score of 11-2.

Cutting, cradling and sprinting out on the field, the girls’ lacrosse team is putting in the work with its new season underway. The program has gone through some major changes this year, including the addition of five new coaches. Chantilly alumna Gilly Kelly returned as the JV coach and is now joined by Christine Cosgrave. Meanwhile, oceanography teacher and former head coach Michele Gates, chemistry teacher Rebecca Wills and math teacher Carolgene Reardon will be leading the varsity team.

“They’re all very positive and know the school well since most of them are teachers here or went here,” sophomore and varsity player Caroline Poole said. “They all have a strong connection to Chantilly. One thing that’s definitely different from last year is that I could already tell during tryouts that we’re working a lot harder.”

The new coaches have brought a different style and mindset to the program and can be seen during games right on the sidelines, yelling encouragement and advising the players.

“It’s important to build community and a sense of family on a team. We will need to rely on each other, support and trust each other,” Gates said. “There needs to be fun, discipline and respect for each other. I will work hard for my players and support them.”

The players agree and have noticed a change in team dynamic since the transition.

“They have a different approach to coaching; they’re tough on us but in a good way. They have definitely brought us together more because they’re doing a lot to bring varsity and JV together because it’s one program,” junior and captain Taylor Hannam-Zatz said. “Whereas before we were pretty split, this year it’s more like we’re a lacrosse team and one big group. I’m just hoping to get better as a player and learn more from the new coaches because they definitely have a lot of lacrosse knowledge to share.”

The team is planning to be a strong contender this year, hoping to beat conference rivals such as Oakton, Westfield and Centreville.

“Last year, I helped out with the 7/8 CYA team. It felt good to be out there again, so when the position opened up I thought I would apply for it,” Gates said. “When I was the previous lacrosse coach at Chantilly, we did a lot of running. It certainly helped us to prepare for the competition. We won’t lose a game this year due to lack of fitness.”

With an 11-2 home game victory against Thomas Edison High School on March 12, the girls have started the season strong with their impressive skills.

“Last year, we had a big team, and a lot of people were on the bench during meets and practices,” senior and varsity player Mikayla Szudera said. “They didn’t get to practice and they didn’t get to grow, and this year that’s all we’re focusing on; actually making a team and working for something together. We’re coming back, and I think we’re going to make a big impact this year.”