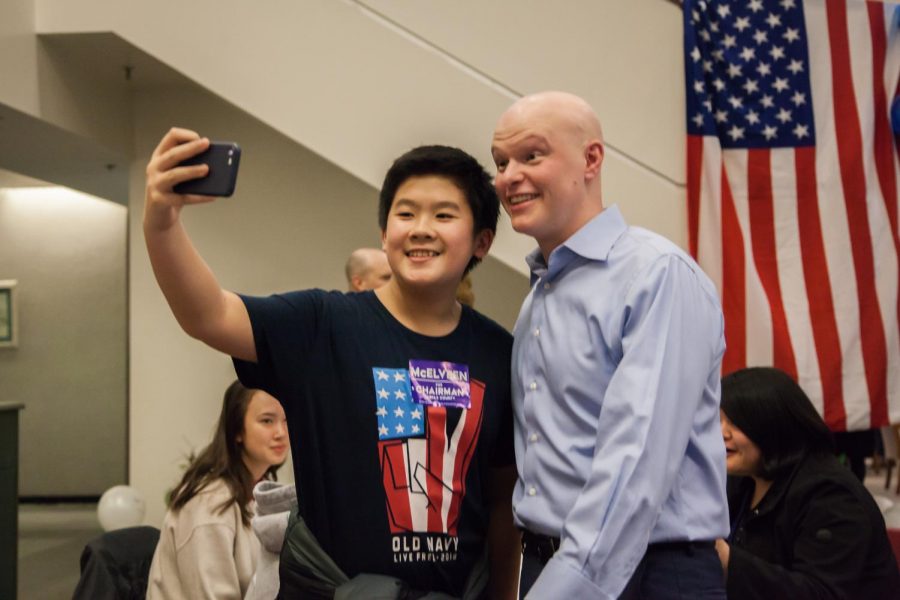 FCPS Board Member Ryan McElveen poses while taking a selfie with a student during his kickoff party. The event gave McElveen the opportunity to get to know his supporters and families from the community better.

From announcing school closures on his Twitter account to his portrayal as Elsa in student-created memes, there are many reasons Fairfax County School Board member Ryan McElveen is a well-known figure across the county.

McElveen recently announced his campaign for chairman of the Fairfax County Board of Supervisors, following current Chairman Sharon Bulova’s retirement announcement. McElveen is the third Democrat to launch his bid for chairman, after Lee District Supervisor Jeff McKay and Timothy Chapman, the managing member of Reston-based real estate development company Chapman Development. If he wins the Democratic primary election, McElveen will be running against Springfield District Supervisor Pat Herrity, who is currently the only Republican candidate for the position.

“His candidacy proves that people, regardless of political party, are desperate for change from same old, same old,” English department chair and yearbook adviser Mary Kay Downes said. “People fear that nothing is truly going to change until people come in with fresh new ideas to benefit everyone.”

McElveen, a member of the School Board since January 2012, has based much of his campaign platform on improving different aspects of the school system that he has been working on as a board member.

“Over the past eight years of serving on the School Board, I’ve been disappointed that, year after year, our board has had to make cuts to our school system’s programs and services, increase class sizes and increase student fees,” McElveen said in an email interview. “I am running for chairman to ensure that Fairfax County has a voice that stands up for our school system.”

Through social media and different school events, McElveen has formed bonds with students across the county.

The connections that McElveen maintains with the student population may prove advantageous for his campaign, as many students will have the ability to vote in the primary election on June 11 as long as they turn 18 by Nov. 5 of this year.

“I’ll be sharing details about the election and voter registration on my social media,” McElveen said. “My ultimate goal is to get many new voters registered this spring so that they can vote in this election.”

With over 300,000 followers on Twitter, compared to McKay’s roughly 1,500 followers and Herrity’s approximately 2,000 followers, McElveen has gained name recognition from both his position and social media presence.

“There is great excitement behind my campaign, because people know me, and they know where I stand on issues from my time as a School Board member,” McElveen said.

However, some believe that McElveen may have difficulty connecting with the non-student population.

“He may face obstacles with the older voters who don’t share the same love of McElveen that the younger generation does,” Wang said. “Much of his campaign focuses on advocating for the students, so he may face difficulty connecting with older audiences.”

Furthermore, given many endorsements of opponent Jeff McKay, some believe McElveen may face a larger challenge.

“Jeff McKay has been an extraordinarily competent and professional member of the Board of Supervisors with roots in Virginia, and I believe he won this endorsement from his peers because of his service to the county,” Downes said.

In order to kickoff his campaign, McElveen held a Winterfest and Campaign Kickoff in January. The event was sponsored by Kung Fu Tea and offered free admission for families.

“His kickoff was a lot of fun; there was free food, bubble tea and music,” Wang said. “As he made his way around the crowd, he tried to connect with every person who came to support him; I think that was especially inspiring.”

As McElveen’s campaign continues, community members can visit McElveenForChairman.com to learn more about his platform prior to the primary election.