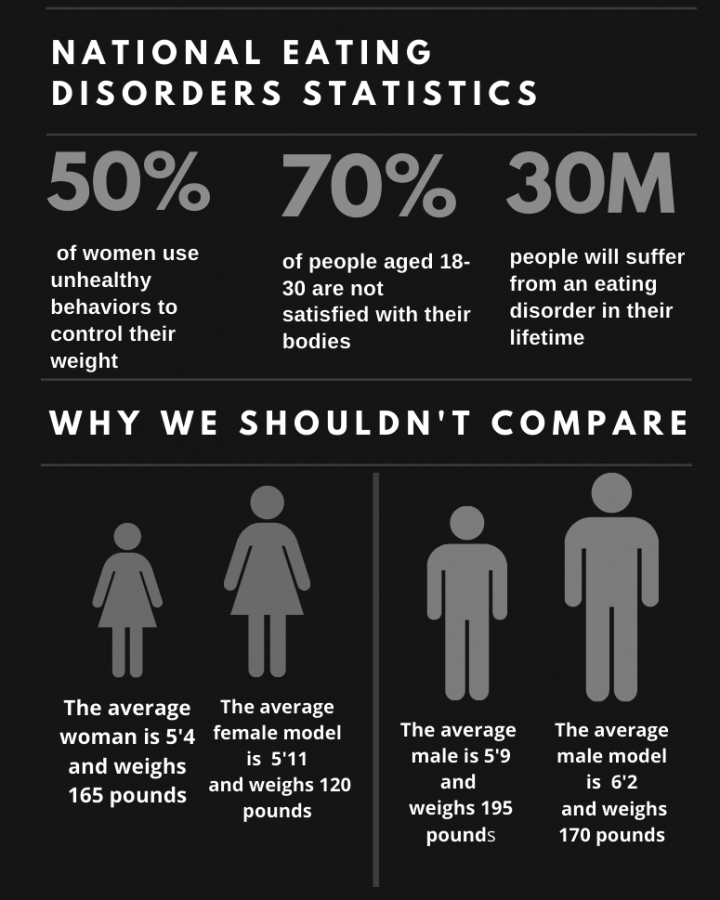 We see images of “perfect” bodies all around us: on television, in movies, in magazine ads and online. The truth is that people come in all shapes and sizes and anyone can be beautiful.
“People just need to keep in mind that when they look at those images, it’s not how people usually look all the time,” senior Amro Ibrahim said. “It is how they look when they are considered to be at their best.”
Social media and society emphasize thinness as a standard for female beauty, and the bodies idealized in the media further emphasize this standard. It’s important to understand that the ideal body image as presented by the media is not always healthy.
“I feel like it’s a man-made thing that we have been imposing on ourselves,” senior Ellie Cheung said. “It’s really hard to escape being affected by what society says about how you are supposed to look.”
Both men and women frequently compare their own bodies to those they see around them, sometimes to the extent that their attitudes toward their bodies become intensely negative. Exposure to images of the “perfect body” can even trigger eating disorders and mental health issues.
“A lot of girls [say things] like, ‘Spring break is coming; I have to get my bikini body’ or ‘I need to lose weight to fit into my prom dress,’” Cheung said.
Although distorted body image is widely known to impact women and girls, men and boys are also affected. Society doesn’t always acknowledge that men can be just as insecure about their looks as women. Advertisements and other social media images raise the standards and idealize well-built men.
“The ideal type for men portrayed by society is to be tall, lean and muscular, because that is how most celebrities look,” Cheung said. “But then the question is, where did that ideal body type originate from? Because now high schoolers compare themselves to that standard.”
The most commonly recognized form of body-shaming seems to be fat-shaming, which is the act of judging or humiliating someone for being what someone else perceives as overweight. However, people who are skinny can also be shamed for their body type. Telling someone who can’t gain weight to eat a cheeseburger is parallel to telling someone who struggles with losing weight to watch what they eat.
“Anyone can be body-shamed; you can be fat or skinny, tall or short,” senior Annie Wu said. “If your body doesn’t look like society’s ideal body, people can make critical comments on your appearance.”
On the other hand, there are differences between the two types of shaming. Skinny women can be told that they are not real women because they don’t have curves, while women who are overweight can be scrutinized for doing things that skinnier women do without criticism. For example, if a plus-sized woman wears a crop top or revealing clothing, she might receive harsh comments for showing off too much skin. If a skinny woman wears the exact same thing, however, she would not likely receive the same type of scrutiny.
We should not make comments about other people’s bodies. Judging the appearance of others can have detrimental effects on their mental health. We should strive to normalize body positivity and eliminate the stigma against different body shapes and sizes.
“Do not judge someone based on their appearance because you don’t know what they are dealing with internally,” Wu said. ”It is important to be kind to everyone.”