Apple fans, give Android a chance 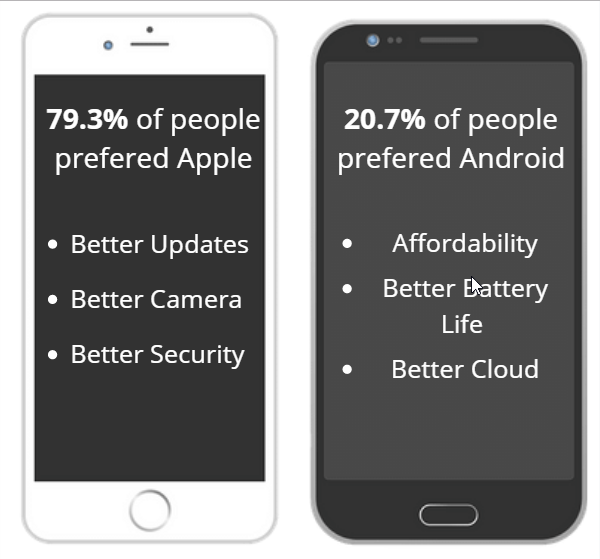 There’s no hiding the rivalry between Apple and Android, with Samsung, LG and Google phones fighting to gain the popularity of Apple, leading to the question: what has Apple done to deserve the hype, and is it still justified today?

Apple’s worldwide success can likely be attributed to its early introduction in the market, coming out with one of the first smartphones, becoming the third company to do so, following BlackBerry and IBM. The iconic brand’s seamless transition into the market was made possible by the innovations already set in place by BlackBerry, and the popularity of its iPod product line. What truly set Apple apart, though, was its consumer-friendly features compared to other phones available at the time, with video and longer battery life being two of its most valuable facets. The appeal to consumers can still be found in modern iPhones, mostly in the simple and chic design.

Unfortunately, many believe the consistency found in Apple products is the company’s fatal flaw, especially in regard to the lack of creativity in the most recent models.

“Apple hasn’t really been making new innovations lately: their phones have been the same, just more money,” freshman Selena Hamad said. “It’s the same thing just with little tweaks, like the new iPhone 11; they just changed the camera, that’s it.”

Which brings up another issue: Apple copying other companies. According to CNET, a technology review website, most of the iPhone X’s features, such as the removal of the home button, larger screen, wireless charging and face ID, can all be previously attributed to Android products.

“I think the people that work at Apple have a really good idea to see what people are into,” Hesse said. “So if a different company comes out with something kind of new and exciting and people are interested in it, I think Apple really seizes the opportunity.”

Another drawback is the high prices of Apple products. Though Apple is not considered a luxury brand, its main demographic is the upper middle class, according to Retail Dive, a retail trends website. This target audience results in high prices, with those in lower economic classes unable to finance their products.

“Apple products have hype because of the price,” sophomore Sanyam Shekhwat said. “Anyone rich enough to own it flaunts it. This creates hype for the next phone because everyone wants it first, just to show off.”

In comparison to Apple products, Android brands are forced to work harder to create new and exciting technologies in order to compete. Unfortunately, Android companies have been overshadowed, with the two highest profiting Android companies, Samsung and Huawei, outsold by Apple, according to The Motley Fool, a finance website. The smartphone market has been saturated with Apple products for over a decade, with few questioning how deserved the loyalty and borderline monopoly Apple possesses is.

“While Apple is making consumers buy their specific phone chargers, dongles, etc., Android and other companies use the same charger for sheer ease of use,” Shekhwat said. “Android is making phones with many companies, each with their own pros and cons.”

Android companies produce versatile devices that are more affordable and innovative alternatives to Apple products. In comparison, Apple follows the same generic pattern with its newer launches, providing little nuance to the tech industry, with its most favorable feature being the support of the general public. This unfortunately results in pressure, specifically on the younger generation, to fit in and own an iPhone.

“Samsung has been doing all these new innovations, like some of the other Android companies, but their phones are cheaper, and they don’t really get a lot of recognition because they’re not Apple,” Hamad said. “They’re not really well-known, but they’ve made a lot of improvements and innovations, so I don’t think Apple deserves the hype.”