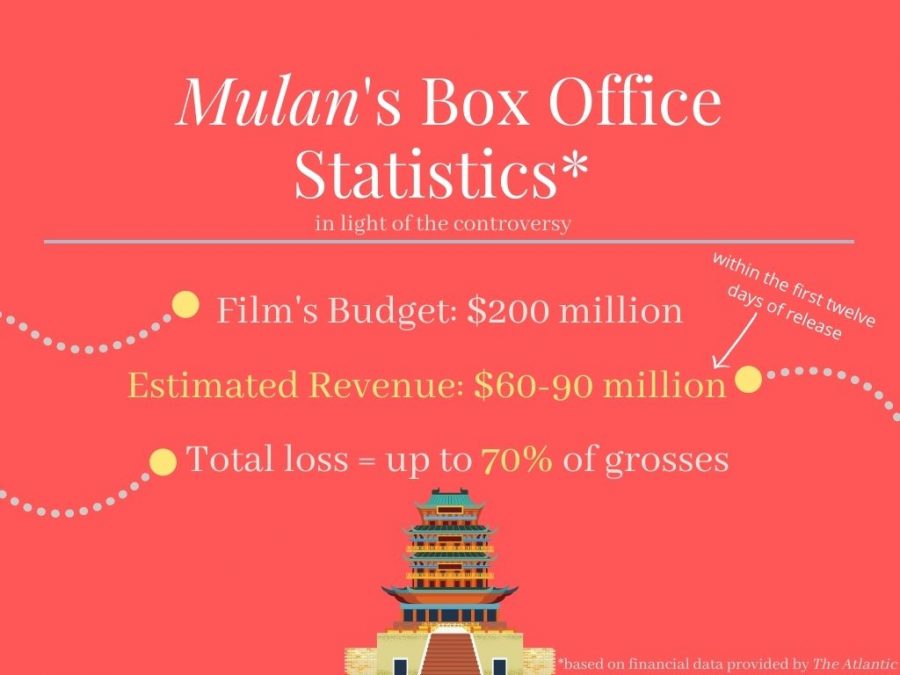 "Mulan" did not do as well at the box office as expected due to the controversies surrounding its production.

When Walt Disney Studios first teased the release of their new live-action film “Mulan,” thousands of people expressed their enthusiasm for the remake of the 1998 animated film about a girl-turned-warrior. However, the excitement around “Mulan” quickly turned into animosity upon its release on Disney+ on Sept. 4 for Disney’s alleged endorsement of human rights abuses.

While “Mulan” itself garnered mostly decent reviews, it was the end credits that caught viewers’ attention; after introducing the film’s large cast, Disney gave thanks to numerous Chinese governing bodies that offered their help with the movie’s filming, including that of the city of Xinjiang.

According to Ben Westcott and Selina Wang of CNN Business, Xinjiang has a history of human rights violations, such as having imprisoned and tortured two million Turkish Uyghurs in “re-education camps” around the city. This was enough to make many skeptical of “Mulan,” but these concerns escalated when a Weibo video from August 2019 resurfaced of the film’s lead actress, Liu Yufei, expressing her support of the Hong Kong Police Force (HKPF). In recent years, the HKPF has become infamous for their use of extreme violence towards peaceful protestors in the country.

Now, thousands are taking to social media to express their disgust about the issues surrounding “Mulan,” including members of the Chantilly community.

“I don’t agree with the aggressiveness of cancel culture, but I do think we should be holding corporations to the same standards we hold ourselves to,” sophomore Brian Ng said. “I’m assuming most wouldn’t support the Muslim internment camps.”

While Ng, a Chinese-American, wasn’t too interested in “Mulan” at first, he now agrees with critics that claim it deserves the backlash.

“I think the controversy is justified,” Ng said. “Disney, despite [being] responsible for the happiness of the childhoods of many, should be held accountable.”

Still, there are many that continue to support “Mulan,” either to celebrate it being a remake of a renowned classic or because they believe the film itself should not be associated with the problems surrounding its production. For one Charger, it is a combination of both reasons.

“I do not think the problems with “Mulan” should affect people’s [views] on the movie,” freshman Shloka Nair said. “I was so excited to hear that Disney was making a live-action movie of ‘Mulan.’”

Nair added that she was looking for a Disney adaptation that she believed would be entertaining and that the movie definitely satisfied her expectations.

“I do not think that Disney [deserves] the bad press that [it is] getting,” Nair said. The film was well done.”

However, the support for the movie has not stopped its critics from continuing to voice their disapproval. Despite over a month passing since the movie’s release, new posts are continuing to come in every day under #BoycottMulan, which trended worldwide on Twitter in September. To those against the movie such as Ng,  the controversy is not just a problem limited to the movie itself, but stands as a reflection of worldwide issues, and speaking up is the only way that they can hopefully be rectified.

“[‘Mulan’] is not art because art enhances the world to make it better; this is our sickness,” Ng said. “I think the fact we are standing up is amazing. It’s the right thing to do, and this is a means to do it.”