What’s on the ballot: looking at Constitutional Amendment 1 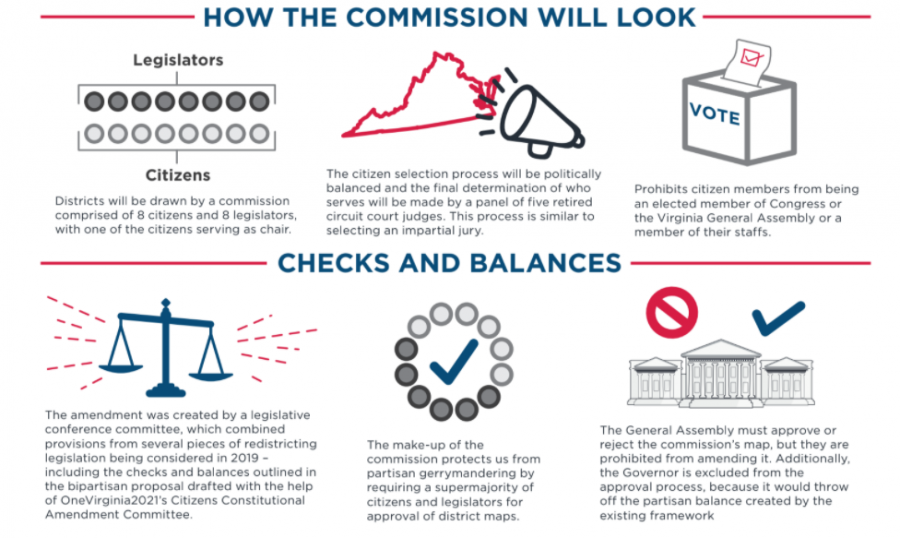 When voters cast their ballot this November, they will not only be voting for the next president of the United States, but also for a state constitutional amendment.

Constitutional Amendment 1 aims to end gerrymandering by establishing a bipartisan redistricting commission composed of citizens and members of the General Assembly (GA). Every ten years after data from the census is collected, districts are redrawn to reflect the evolving demographic and political nature of Virginia. Gerrymandering is when districts are redrawn to benefit certain people during elections, which harms marginalized communities disproportionately.

“Usually, the only people in favor of gerrymandering are the people doing the gerrymandering,” history teacher Joseph Clement said.

Virginia’s current redistricting system allows the General Assembly to draw districts, essentially allowing politicians to draw district boundaries most favorable to their re-election, which both the Republican and Democratic party have had a hand in.

“The thinking behind [Amendment 1] is that if it’s a bipartisan group doing the redistricting, there will be less gerrymandering,” Clement said.

However, the amendment has faced opposition. Virginia Democrats argue that citizens serving on the redistricting commission will be hand-picked by politicians and gerrymandering will continue to linger in Virginia.

The Arlington Democrats argue that Amendment 1 is not the solution to ending gerrymandering because legislators will continue to have a hand in drawing maps. Instead, they propose creating non-partisan redistricting legislation that will be presented during the upcoming legislative session.

“After [Democrats] gain[ed] a majority in the [General Assembly], they want[ed] to hold onto their political power in the status quo,” So said. “It is ultimately disappointing to see parties act this way, but at the end of the day, gerrymandering affects both parties and Amendment 1 was a compromise between both to begin with.”

Recently, the Washington Post came out in support of Amendment 1 in its Sept. 2 issue. Similarly, a survey conducted by Christopher Newport University’s Wason Center for Public Policy noted that approximately 70% of Virginia voters supported the amendment in December of 2019.

“If Amendment 1 is not passed, we remain in the shambles of our partisan system today where politicians cheat and cherry-pick their own voters,” So said. “We will continue to live in a system with no transparency and no voice.”