Bias in education is harmful 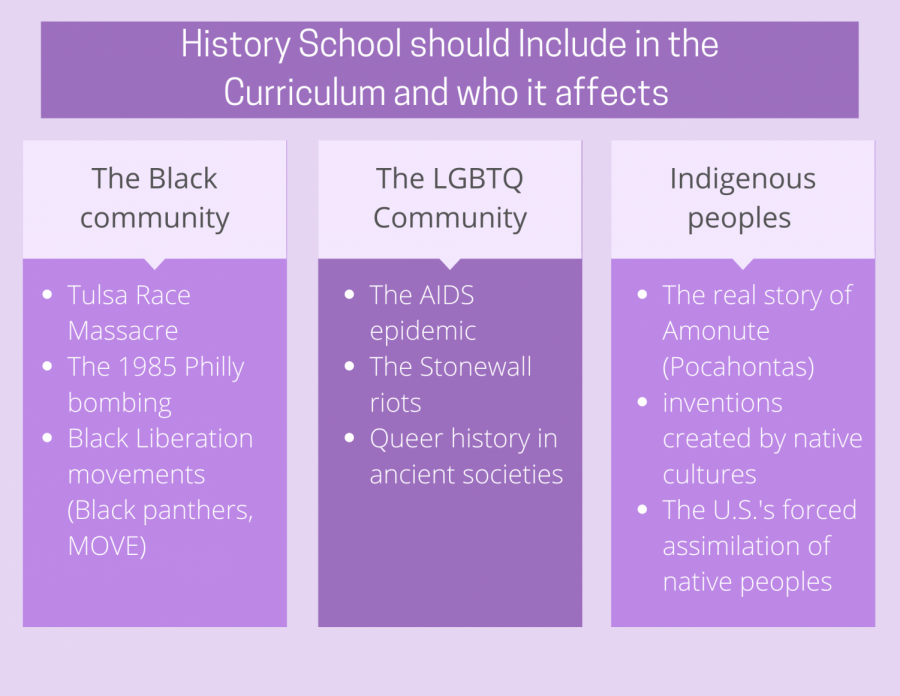 This shows all the history that should be taught in schools these days to give people a better understanding of the past.

America had a revolution with social justice this past year. From the Black Lives Matter movement to LGBTQ rights, many issues were highlighted through social media.

When learning about these issues and their history online, students may find that the school has left many significant historical topics out of its curriculum like black, indigenous and LGBTQ history, and this is why it is a problem in need of fixing.

The school teaches the founding of the U.S. and the struggles early colonists faced. In this time period, teachers emphasize how poorly the Indigenous peoples were treated, from the time of the first colonies to the end of manifest destiny. We hear about the destruction and elimination of Native Americans, but the school teaches nothing after the civil war about indigenous history.

According to the  Smithsonian, a 2015 study found that 87% of history content only teaches pre-1900 Indigenous history and 27 states did not talk about any specific individual Native American in their required teaching curriculum. With important information about indigenous people not being taught, it leads people to forget that our government has ostracized their community and attempted to eradicate them.

Another topic that is barely touched on is LGBTQ history in America and around the world, with most schools only mentioning the legalization and protection of same-sex marriage. An article by Board Teachers claims that four states require queer history to be taught while six states have banned the mention of the LGBTQ community in classrooms.

If the school is to teach queer history, learning about LGBTQ people in the civilizations before us will help teach individuals that being gay is natural and not something of the 21st century.

“I still feel like I don’t know much about LGBTQ history, and I am LGBTQ,” junior Natalie Snevely said. “It’s hard to learn since history pushed so much LGBTQ erasure and the school history system is affected [by that].”

Though most LGBTQ history is not discussed in school, Black history is one of the few topics of untold history that is somewhat covered, although, there are many historical events that are pushed off aside.

The Washington Posts states that only five years ago, freshman textbooks claimed that African slaves between the 1500s to 1800s were workers instead of a group of brutalized people. It also comes as lesser known knowledge that California’s gun laws were caused by open carry of Black panther members. The Smithsonian magazine states that Black Panther members started patrolling for Oakland Police officers, this in turn caused the NRA to support gun control.

By teaching the tragedies of the Tulsa massacre, the current harm of sundown towns and the importance of Juneteenth, students around the U.S. will be able to fully understand the struggles faced by black people and help to give a non-Eurocentric view of history.

“Going through high school and later college (where I majored in history), I never learned about events like the Tulsa Massacre, Seneca Falls Convention and Stonewall Riots,” history teacher Christopher Hathaway said.

Not only are many of these events not covered to the full extent they should be, but many historical figures are misrepresented.

For example, the Star Tribune states that Teddy Roosevelt, the president who created the U.S.’s first National Parks, stole the land from indigenous tribes. On top of that Indian Country Today explains that Roosevelt famously said “I don’t go as far as to think that the only good Indians are dead  Indians, but I believe nine out of ten are.”

Another famous American leader, schools only give half the story of, is Abe Lincoln, the president credited for freeing thousands of enslaved African Americans, only freed those who did not benefit him. An article by the History Channel states that the Emancipation Proclamation only freed slaves from confederate states. Kentucky, Maryland, Delaware and the union loyal part of Missouri were still allowed to keep their slaves.

By covering up the dark secrets of these historical figures, it paints a picture for students that the outcome of a political policy is the only part that matters and whoever made it must be a saint, which is almost never true.

“When I was a younger kid, I used to greatly admire Abraham Lincoln because he freed slaves,” junior Gitika Gorthi said. “I was never told he only freed slaves in the South to preserve the Union during the Civil War.”

The main argument against teaching all these different subjects in general education classes is that there isn’t enough time to cover everything and that learning about it won’t be useful on tests or exams. There is an issue with that argument though, history is not taught to pass tests, it is taught to give people a better understanding of the world.

“History helps put the issues and events of today into context,” Hathaway said. “If we don’t have the full history (or as much as we can get), we’re not going to understand what is happening now.”