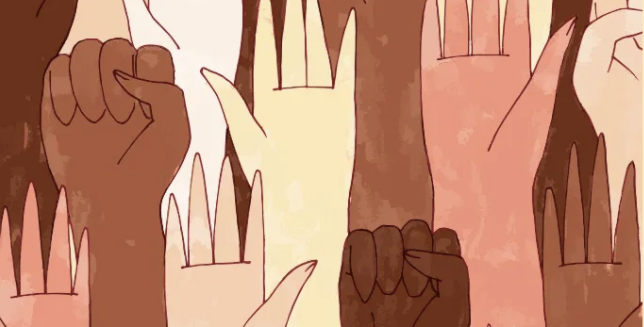 Many of today’s young adults have made significant progress in expressing their disgust toward racially discriminating ideals. Now, the goal is to pay more attention to minimizing racial inequality for the sake of America’s future.

According to Psychology Today, it is very common for people to be racist for many reasons including fear, an emotion that holds tremendous power. It can cloud the human mind against the idea of unification, despite the color one is born with. It can also be common for humans to make a barrier against something that appears to be unfamiliar, which explains why there is an opposition to accepting others that are different.

“Many [people] are very influenced by their parents and the beliefs of people around them which can lead to negative stereotypes,” sophomore Sheima Dafaalla said. “[We should] use our voice even if we do not feel like we are reaching anyone, as it slowly does help change the negative views, although there are always going to be people who are opposed to what someone believes in.”

Learning is a strong force of repulsion toward racial discrimination as it allows people to hear and think about different perspectives based on facts and knowledge according to UNESCO.

“Education broadens a student’s awareness and understanding by building empathy in people who may be alike and different from the student themselves,” English teacher Kimberly Scott said. “Many times, racism is perpetuated because the generation prior is usually in a mode of acting in racist ways. To break the cycle, something needs to interrupt it such as a novel read in class, a court case, a study of a group of people or even an event which shows that education is a beneficial way to mitigate racism.”

Educators can make a remarkable difference in students’ lives by helping them understand why certain things are right and wrong when it comes to the topic of racism. According to UNESCO, it is also important for teachers to give opportunities to students for expressing feelings about the topic so that they can broaden their thinking.

“I am very proud to work at Chantilly High School where there is such a concerted effort this year to examine ourselves, our motivations, our thinking and our actions,” Scott said. “Our administration makes changes where necessary to work toward making changes so that everyone feels valued.”

Based on information provided by “Global Citizen” influencers can also play a big role in diminishing racism by reaching out to their followers and expressing their perspectives on the issue. Many influencers such as Zendaya, support anti-racism by speaking on the topic and sharing their experiences on national television. If young adults are passionate about fighting racism there are many resources provided by the University of Washington.

“[It helps to have] more icons of a certain race who represent something that the general population believes in such as an organization or the government,” Dafaalla said.

Along with many online and physical resources to stand against racism, it is important to bond with people who are different from us to have diversity within life. The best way to stand united together is by accepting each other and being kind to everyone that can start with small actions like sharing, working on projects and hanging out with different groups.

“Personal experience and promoting opportunities for relationships matter, as they lead to a long-lasting change,” Scott said.

The current generation has a responsibility to fight against what is wrong to make the world a better place. Individuals can start by examining themselves and make an effort to grow for the betterment of humanity.

“Change can come in many forms but the best kind of change is based on caring about other people,” Scott said.