‘Tis the season: Christmas celebrations vary around the world 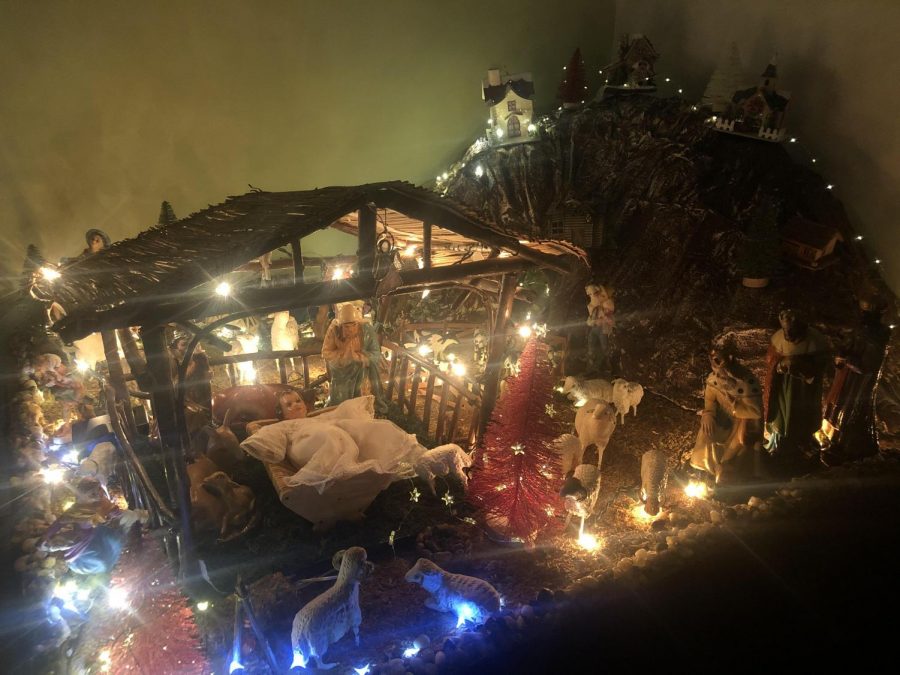 A Nativity scene made by Maria Eugenia, math teacher Cecilia Torres’s aunt, to appreciate her religion, with wood, dolls and lights on the first week of December, celebrating Christmas in Peru.

A steaming mug of hot cocoa, milk and cookies set out for Santa, presents wrapped under the tree and the mesmerizing sight of snow—at least, this is the classic American Christmas. Although world traditions vary, the joyous spirit of the holiday season always reigns through.

Streets and shops are decorated with elaborate lights and decorations during the winter holidays in France. On Christmas Eve, many people go to church at midnight to celebrate with their families.

“We still go to midnight mass,” French teacher Jocelyn Smith said. “[My husband and I] let the children open one gift on Christmas Eve and we have the main meal on Christmas day.”

Christmas dinner in France traditionally includes a stuffed roast goose, ham or turkey with a Bûche de Noël, or Christmas Log, as dessert. A common appetizer is foie gras, a French delicacy made from the liver of a duck or goose.

“In my household, we often had seafood for a starter,” Smith said. “Many people also have foie gras during Christmas, [but] we always have a Christmas Log.”

With a major Christian population, South Korea widely celebrates Christmas. Seoul, the capital city, features a light show every year that illuminates the city center and bridges, according to WhyChristmas. In addition to attending this popular festival, families often exchange presents and money.

“We’ll start [the day] by going to church in the morning and celebrating Jesus’s birth,” freshman Annie Han said.

After an early morning church excursion, many families congregate at home and serve stir fry with vegetables and meat with songpyeon, a popular type of rice cake.

“We usually just have big family gatherings with a lot of food,” Han said. “There are a lot of people in the home at once, so it gets pretty messy, but it’s always very exciting.”

Christmas celebrations in Italy are influenced by Winter Solstice festivals, particularly Saturnalia, during which people light candles and offer small gifts to children. Italians celebrate Christmas for five weeks, from early December to the beginning of January.

“[My wife and I] let my son lead the activities surrounding Christmas Day, hearkening back to the Roman traditions,” Latin teacher Albert Gunn said. “So we let him pick which events we attend.”

On Christmas Eve, many refrain from eating meat or dairy throughout the day, and instead indulge in a light seafood meal for dinner.

“My wife is of Italian heritage,” Gunn said. “We sometimes celebrate Christmas Eve dinner with the Feast of the Seven Fishes, in which various fish dishes are prepared in accord with the season. Having studied abroad in Italy, I found many of these traditions unique.”

On Christmas Day, Maronite Catholics in Lebanon, build elaborate manger scenes in their homes called Nativity Crib’s. Manger scenes are exhibitions representing the birth of Jesus, decorated with dolls and wood and hay. The manger, where baby Jesus rests, is placed in the front and center with Jesus being placed on Christmas Eve, the day he was born. Rather than a Christmas tree, the Nativity Crib is the main focus for the Christmas prayers.

“Lebanon has a very festive atmosphere during the Christmas time, since it is the land where Jesus has lived,” Smith said. “One big difference [from American traditions] is the Christmas manger that sometimes is bigger than the tree and resembles the rocky mountains around the actual manger in Bethlehem.”

Some Lebanese eat Maamoul, a cookie filled with nuts and dried fruits. In addition, people enjoy sugared almonds and strong cups of coffee while visiting families during the holiday season.

“[Maamoul are] cookies stuffed with pistachios, dates or almonds that are offered during the Christmas time and are very delicious,” Smith said. “Since Lebanon was a French colony, many of the Lebanese Christmas traditions and food are similar to the French traditions.”

Compared to other religious festivals, Christmas is quite small in India. Instead of a traditional Christmas tree, some families decorate a mango or banana tree with ornaments and lights. Others place small oil-burning clay lamps on their roofs and carol with their church friends.

“Since India is such a big country with so many cultures, it is very hard to recount traditions that will describe all of it,” freshman Grace Paul said. “Caroling is a lot different than the stereotypical type in America; instead of going from door to door, we meet with people from our church and sing. We all sing in their houses and it’s a lot of fun, even though it gets pretty chaotic.”

The main meal is eaten on Christmas Eve. Some people fast from sun up to sun down through Dec. 1 to Christmas day.

“In Kerala, we usually eat an Indian food called Appam, which is basically an Indian rice pancake, with chicken stew,” Paul said. “The whole day is fun and pretty chaotic, since we wake up very early and go to bed really late.”

Unlike typical American celebrations, Peruvians celebrate on Noche Buena, or Christmas Eve. They attend church late at night and honor this holiday with fireworks during parties throughout the day.

Peruvians have a Christmas dinner very similar to the American Thanksgiving feast, including a turkey, mashed potatoes and stuffing. A popular drink is Pisco Sour, an alcoholic drink made with pisco.

“In my family, we all gather together for a big dinner from 9 p.m. to 10 p.m., trying to make it as late as possible since the point is to stay awake [until] midnight,” Torres said. “We make a big roasted turkey and ham with lots of side dishes: mashed potatoes, salads, stuffing and rice. For dessert, we have panetón and hot chocolate. Unlike Virginia, we celebrate by bringing 40+ people together and party till midnight. At midnight, everyone wishes a Merry Christmas and gives kisses on their cheek before unwrapping the bundles of gifts.”