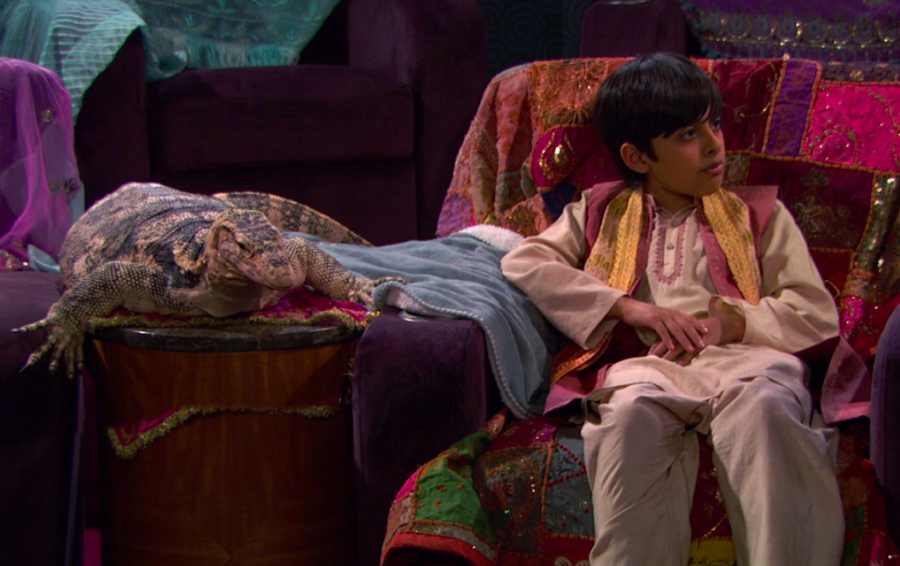 A stereotypical character represents false interpretations of Indian culture in a scene from “Jessie,” streaming on Disney+.

Whether it be all Indian students are over-achievers or that they can’t have social lives, American media continues to convey toxic ideas that reinforce negative perceptions of Indian culture. In effect, this causes Indians to box themselves into insulting stereotypes that can result in racism or injured pride in their heritage.

“[Although] I like how they have Indian culture in American TV shows since it’s hard for people of color to get into the Hollywood industry, I think they stereotype the culture way too much,” junior Aasa Domalapati said. “It’s not the kind of representation I would want.”

Throughout the years, many shows and characters have contained blatant stereotypes of Indian culture. For example, the show “Jessie,” a popular Disney Channel series from 10 years ago, was one of many that created an offensive picture of Indians, especially in the minds of children.

One of the characters was an Indian child who spoke with a heavy, fake accent that was almost comical and easy for children to make fun of. The character also had a 7-foot-long pet lizard and claimed that people in India slept on beds of nails. While for adults these stereotypes may be taken with no more than an eye-roll, impressionable children can easily believe them to be true and look down on Indians because of it.

“The standards we and other people of color are held to don’t allow us to embrace our own ethnicities and it only makes us more self-conscious,” junior Sreya Devarakonda said.

This isn’t to say that every portrayal of Indian culture in the media is completely inaccurate, because sometimes that isn’t the case. Take Mindy Kaling’s show “Never Have I Ever,” a series following an Indian-American teenager as she balances teenage friendships, romance and the demands of her traditional Indian family.

For some Indians, the show couldn’t be more relatable. There’s the pressure to do well in school, the parental opposition to the other sex right up until the arranged marriage and a traditional community that leaves little room to stray from the status quo. For them, the show is just another mildly enjoyable teen comedy. They can overlook, or even laugh at, some of the obvious stereotypes in the show because in their own lives they are also surrounded by the lighter and more enjoyable parts of the culture.

The ultimate issue comes from the fact that for most non-Indians, a show like this is one of the few representations of Indian life that they are exposed to. Many shows portray Indians complaining about functions, sneaking around behind their conservative parents’ backs and resisting their own customs, which makes the culture seem undesirable.

“In the media, Indians are often portrayed as the nerdy person who is super smart and gets all A’s,” Devarakonda said. “The portrayal of Indians in this way only reinforces the false stereotypes and makes me feel like I need to live up to them sometimes.”

For many Indian-Americans, arranged marriages are uncommon; children are free to pursue any career they want and their communities are generally more progressive. These people are able to adopt modern lifestyles while continuing to respect and embrace their own heritage. From the close-knit and supportive communities to exciting festivals and celebrations, there is a lot to enjoy about being Indian, and oftentimes the media doesn’t reflect that.

“Many times cultural aspects are assumed, rather than researched, giving Indian characters and culture an unauthentic feel in television,” junior Katie Craddock said. “In comparison with real life, Indian culture on TV is singularly stereotypical and many times racially offensive rather than the wonderfully diverse and beautiful culture I know it to be in actuality.”