Consuming energy drinks may come with a cost 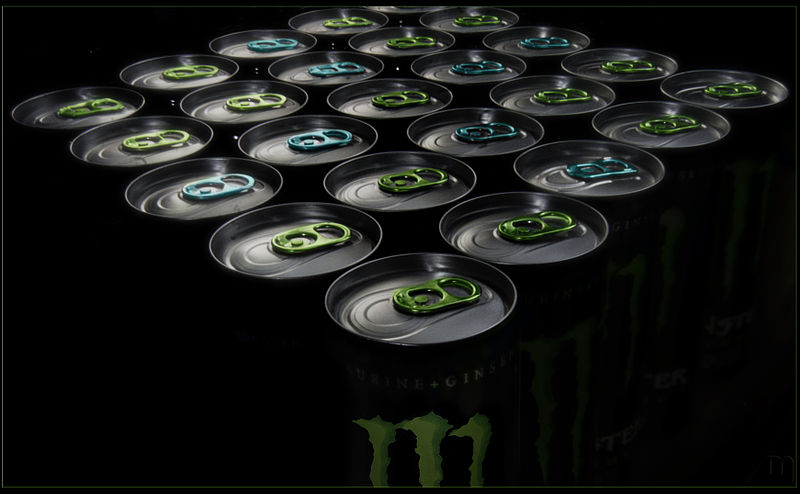 Photo by MrkJohn used under CC BY 2.0

Although energy drinks might be able to provide a performance boost, they can also increase risks of serious health conditions.

Rows of colorful cans line supermarket aisles, advertising eccentric flavors and eyebrow-raising ingredients in bold, edgy text. Monster, Red Bull, 5-Hour Energy, Rockstar and Bang are just some of the leading brands of the energy drink industry, which has grown in sales over the past few years. Statista reports that in the U.S. alone, energy drink sales from 2015 to 2020 have skyrocketed from $2.8 billion to $3.7 billion.

Promoted as  beverages that can increase energy, enhance alertness and improve physical performance, energy drinks are a popular option among people looking for a quick pick-me-up due to high, potent levels of caffeine and sugar. According to the National Center for Complementary and Imaginative Health (NCIH), caffeine levels in a 16 oz. energy drink range from 70 to 240 mg, while an energy shot will average around 113 to 240 mg of caffeine. In comparison, a 12 oz. soda contains 35 mg of caffeine and an 8 oz. black coffee has around 100 mg. With an additional 54 to 62 grams of added sugar, having a single energy drink will exceed the maximum added sugar levels recommended for an entire day.

Because they have such high levels of caffeine and artificial sugar, energy drinks can pose as a major health hazard for its consumers. In fact, Insider reports that in the U.S, about 20,000 emergency-room visits in 2011 were associated with energy drink use. Moreover, a report published in the National Library of Medicine stated five out of 11 patients with serious cardiovascular issues were regular consumers of energy drinks. In general, excessive caffeine can lead to anxiety, insomnia and caffeine abuse.

“It’s very addicting, which is why people continue drinking it even after knowing the side effects,” junior Tina Vu said. “The relationship between [energy drinks and its consumer] can be very tiring, ironically enough.”

The high sugar content of energy drinks can also lead to obesity, diabetes, heart conditions, gout, poor bone health and increased risk of premature death, according to the Harvard T. H. Chan School of Public Health. All negative health effects associated with energy drinks are amplified in children and teens.

Although the health concerns that come with energy drinks may deter some from drinking it, others believe that the instant energy rush outweighs the health costs.

“Personally, I’ve never needed to drink one, even when I would pull an all-nighter studying for a test. I think other people drink [energy drinks] for the needed boost of energy, hence the name,” Vu said. “The high levels of caffeine and sugar throw me off a bit, but it’s the reason why energy drinks work in the first place, right?”

Energy drinks are also commonly found in teens’ diets. According to the NCIH, one-third of children ages 12 to 17 consume energy drinks on a regular basis.

“Because teens are constantly stressing over homework assignments and life in general, I definitely think there’s been a rise in sleep deprivation among teens, which just fuels this need for energy drinks,” junior Alissa Nguyen said. “It puts teens at even higher risks for addiction, too.”

Along with combatting fatigue, energy drinks may appeal to teens with their flavor and taste, and most concerning, to their desire to follow trends, influenced by peers and what they see on social media.

“I think teens tend to romanticize energy drinks,” Nguyen said. “On TikTok, things like ‘being grunge’ or ‘being alt’ became a trend. People have started to associate these aesthetics with energy drinks, along with being edgy and even being mentally-ill.”

According to Sharp, companies’ usage of marketing tactics such as adorning their product with eye-appealing designs, brightly-colored containers and interesting logos help draw in teens, who may find them to be more interesting than a regular coffee.

“I remember in middle school my friends would talk about their parents finding out they drank a Monster. It’s crazy how we’ve normalized this behavior at such a young age,” Vu said. “I find that some people always make it a competition to see how little hours you slept, how much coffee you’ve drunken, etc., but you’re not winning. It’s not a flex. Teens definitely romanticize risky behavior in the prospect of being individualistic.”