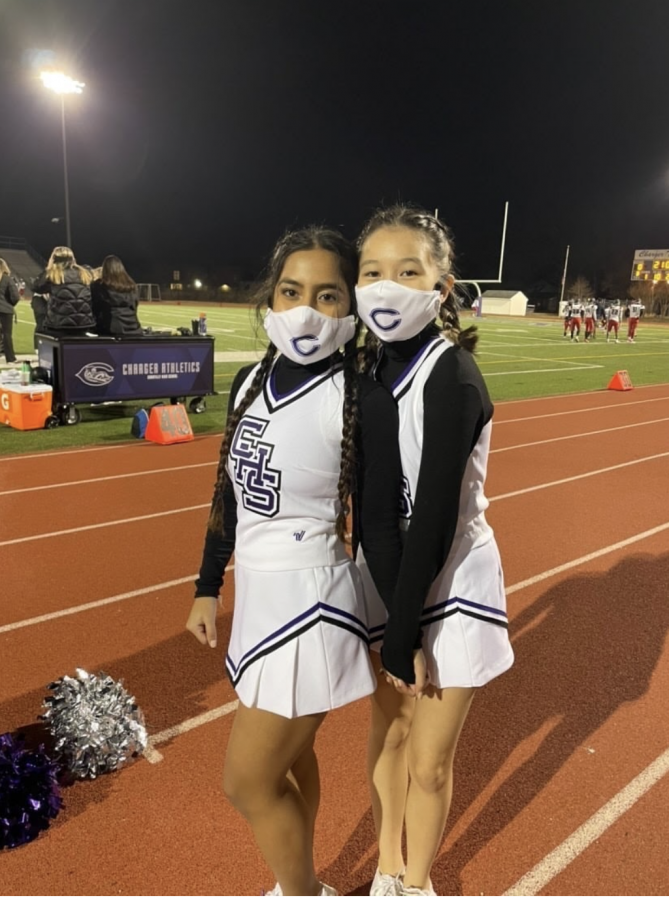 Junior Jinal Nana on the left, Sophomore Amber Christina on the right at their first game of the season.

During the football team’s first victory this season, the cheerleaders were rooting for them on the sidelines while socially distancing and wearing masks. Along with cheering on football games, they are currently participating in Virginia High School League (VHSL) competitions. With the cheer team making every attempt to accommodate those participating, as well as adjusting under COVID-19 regulations, they have still managed to win competitions.

“We have to wear masks at all times and we have to sanitize every time we get off the cheer mat,” junior Sara Lisenby said. “As for competitions, only one team is in the building at a time and you arrive at the school, warmup, complete and then leave.”

“The biggest effect from COVID-19 for our team is mostly how short the season is and how little time we have until districts,” sophomore Amber Christina said. “Competitions are super different this year because we aren’t allowed to have spectators at all, which is a big thing for cheer because usually the audience chants along with us.”

With little time and no spectators, the cheer team makes the best out of their practices to win competitions. As for awards, they will most likely be virtual and won’t have many spectators. In the regular season, they would have two months to prepare for districts but now they only have three weeks.

“The main challenge is probably just hitting our routine,” Lisenby said. “Our routine this year is already harder than it was last year and since we have to wear masks it makes it much harder as we are all building up our stamina so that we can perform a great routine at districts.”

The teams are not allowed to do a lot of stunts due to the COVID-19 restrictions. For practices, they have to share the gym with basketball, track and football so it is hard for them to find time for practices due to time conflicts.

“We have learned that even though this season is different, we are all extremely capable of going back to states and hopefully winning this year,” Lisenby said.