As students and teachers returned to in-person learning in early March, they shared what their expectations for in-person would be. Interviewees were then interviewed for a second time after they returned to the school to see how their experience actually went. Their answers were compared to see what similarities and differences could be found. 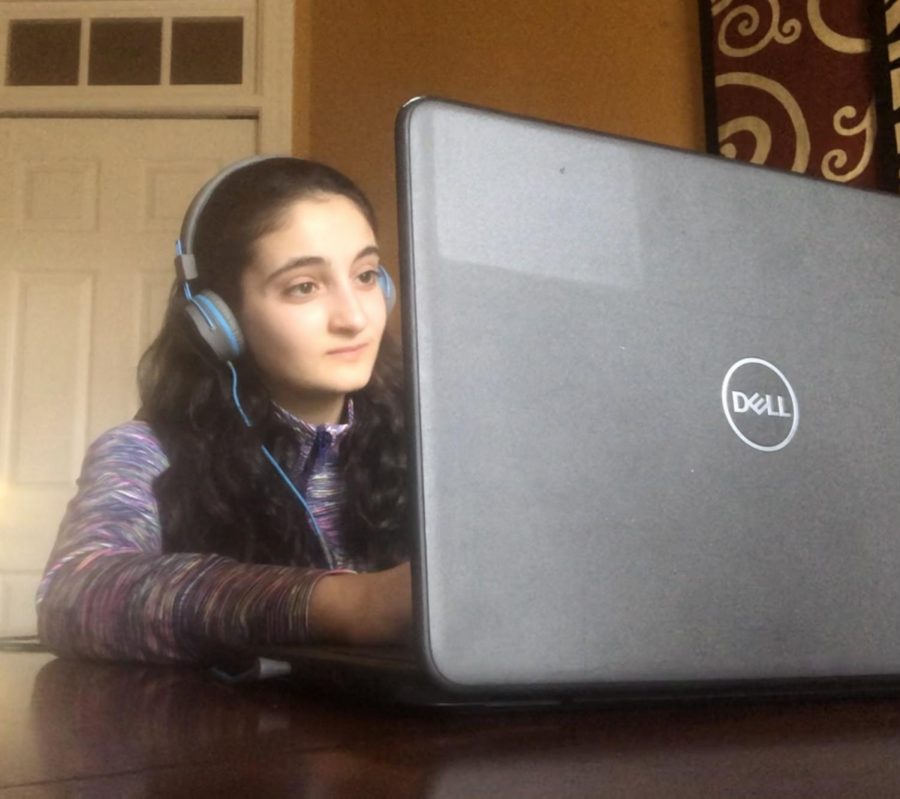 Freshman Eva Jaber works on her computer at home.

Before students and teachers returned to in-person learning in early March, they shared what they expected and what they thought would be different.

Most students haven’t seen their friends face to face in some time and have just had a general lack of physical social interaction.

“I’m most excited about being able to go out again and see some faces,” sophomore Brian Le said. “[Even if you] go out, you don’t really see anyone outside, and it’s really lonely.”

Many believe the initial return will be awkward. Safety measures like six feet social distancing, students not being permitted to loiter in the hallways will be in place; and with the alphabet being split into two parts, each going two days a week, friends can be split up.

“Socially, it’s going to be a little bit odd at first, especially because a lot of my friends that I know are staying home or have names on the opposite side of the alphabet,” freshman Eva Jaber said. “I’m interested to see if we can go outside when the weather is better and, still with masks on, socialize because of better ventilation.”

“I’m looking forward to maybe seeing some more colleagues in-person instead of on a computer screen, and actually seeing some of my students, because a lot of those students have that camera phobia,” English teacher Andrew Wax said.

Online learning has been hard for many, and in-person will be helpful to a lot of students, with teachers being more available and having more materials widely available at school.

[Because] the majority of my students use the chat instead of the microphone so I think we’re gonna lose some of that interconnectability.”

“When you’re at school, you have that work environment feel. You can ask the teachers questions better and get help directly,” Le said.

For many classes, there will be a concurrent model in place with some students in the classroom and the rest still online. Teachers will be teaching both groups at once. While “concurrent” implies that things will be together, the two groups will be generally separated and unable to work together effectively.

“We can’t have in-person students on Blackboard Collaborate with the online students because of the school bandwidth,” Wax said. “We can post the chat so that they can respond to it; and they’ll also have cameras to talk to those online, but the majority of my students use the chat instead of the microphone so I think we’re gonna lose some of that interconnectability.”

Even working together in-person can be difficult with social distancing in place, but it is a requirement by FCPS for safety. Surveys will be taken every so often to check for healthiness and masks are required by everyone.

“I think there will be a few people who try to just let down their mask and be a little reckless,” Le said. “It’s not going to be the most safe. But it’s going to be okay overall.”

As students and teachers return to the building, they go back with excitement and anticipation. Though opinions differ and this will very much be a trial and error scenario, school is finally in session.

“I’m interested in seeing how this will play out,” Jaber said. “I miss school. I miss being inside the building. If people are going back in-person, I’m excited to meet them, and if they’re staying virtual I’m still excited to hopefully see some cameras!”

Haley Oeur is a ninth grader and is in her first year of journalism. She’s not very athletic, but loves to read romance novels and watch cheesy K-Dramas... 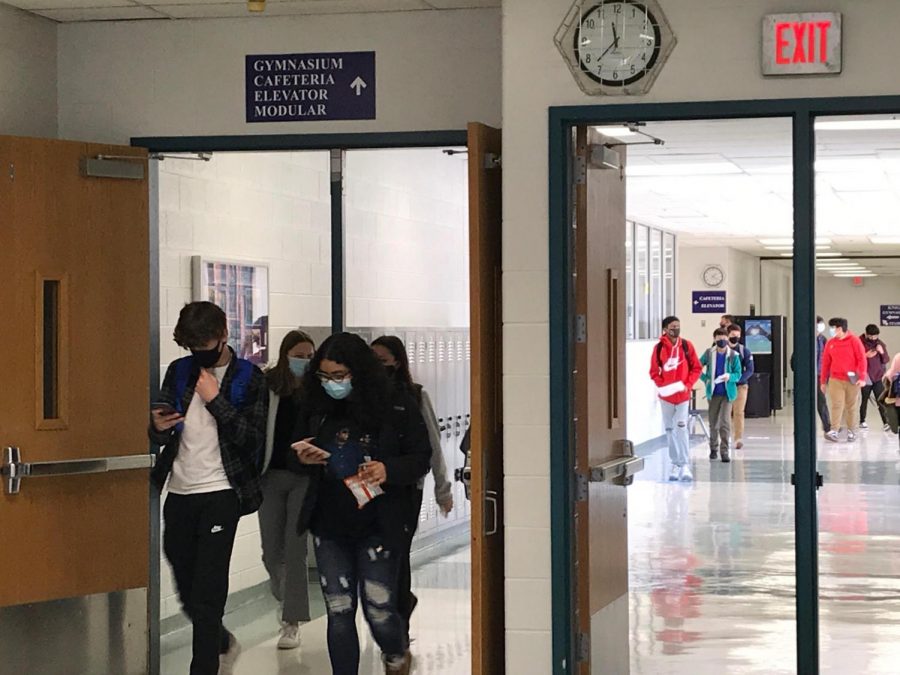 In-school students walk back from lunch.

Jaber was one of the first students to enter the building on March 2. She was assigned Tuesdays and Wednesdays and has done in-person on those days ever since.

“I was really looking forward to going in and I was not disappointed by the experience I had!” Jaber said. “I find it a lot easier to focus and engage. I definitely prefer in-person over virtual.”

The environment of just being in the school has had positive impacts on both teachers and students. Not staring at screens for hours on end and being able to ask teachers questions benefits many.

“[Being in school] forces me to have a sense of responsibility,” Le said. “I always feel like slacking off at home, and I’ve been able to be much more productive compared to being at home.”

Before returning to the school, many who chose in-person were trepidatious. While some people now seem happy about it, others have decided to switch back to virtual.

I found myself having a lot of conversations that I haven’t had in ages. It was surprisingly easy to talk to people and be friends with them.”

“It’s a lot easier to talk to people in school than it is virtual,” Le said. “I found myself having a lot of conversations that I haven’t had in ages. It was surprisingly easy to talk to people and be friends with them.”

One of the most social times of the day, lunch, has been a direct contrast of what it used to be. Music plays over a room made much quieter by the fact that everyone is spaced out and faces one direction for safety.

“Lunch is… a very interesting setting,” Jaber said. “We’re all sitting pretty far apart for obvious reasons, but I’ve never seen a cafeteria so quiet. And it’s peaceful in an eerie kind of way. You’re still able to talk to somebody if you’d like to, there’s just the fact that a lot of people might hear your conversation if you talk at a normal volume.”

Even with so many safety protocols in place, students and teachers are still expected to follow all of them to stay safe.

“[It’s been] surprisingly fantastic,” Le said. “Everyone’s been perfectly social distancing [and] also wearing the mask constantly if not all the time, except for lunch.”

Concurrent learning and group work has been a struggle for many teachers, since it can be hard for them to find an equilibrium teaching two groups at once.

“It’s a balancing act. Making sure I’m not ignoring one group and not the other or giving too much attention to one group. It’s gonna take more practice and more students,” Wax said.

There have been both struggles and successes for students and teachers in the building, and everyone anticipates the future of in-person learning.

“I think the rest of the year is going to go well,” Jaber said. “I wasn’t having trouble with virtual school, but I, just now seeing how cool it is to be back in-person, I’m really excited to keep the hybrid plan, and hopefully next year back to five days a week!”

Haley Oeur is a ninth grader and is in her first year of journalism. She’s not very athletic, but loves to read romance novels and watch cheesy K-Dramas...