Students reflect on importance of siblings 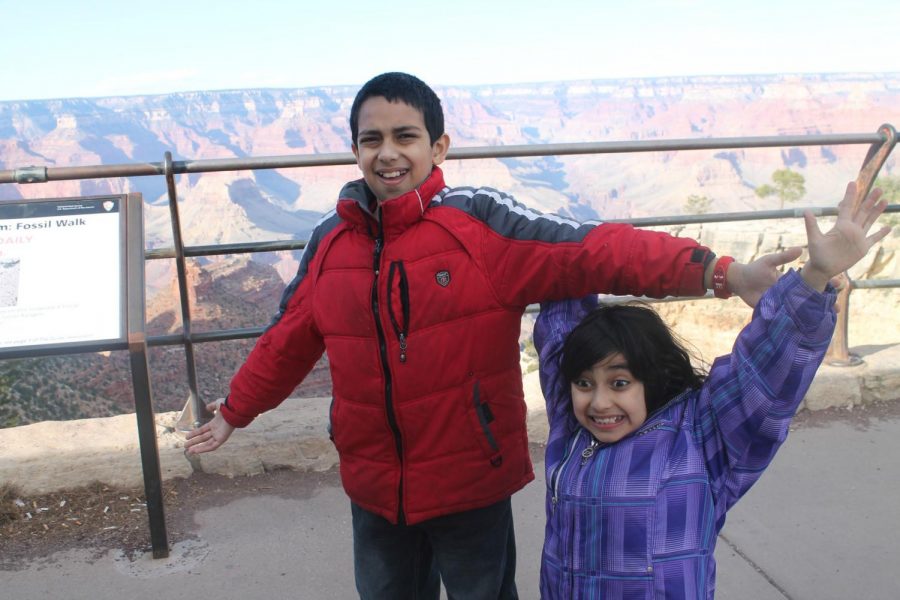 On a family trip to the Grand Canyon in 2013, freshman Diya Kohli and her brother share their excitement. Photo used with permission of Diya Kohli.

Siblings come in all shapes and sizes. They can be each other’s first playmates, greatest confidants and cheerleaders. The bond shared by siblings is one that lasts a lifetime, a constant friendship that can be present from childhood on.

Since siblings are closer in age to each other than to their parents, they often have an easier time connecting and talking with each other.

“Having a brother is so important, especially when my brother is older because he teaches me many things and gives me advice for my future,” freshman Diya Kohli said.

Although siblings share about 50% of the same DNA, they can act and look completely different from each other.

“My sister Emily and I are very similar and she takes after me,” junior Miranda Schuman said. “However, my brother Ben is older and more comical.”

Psychologists discovered in the 1980s that despite siblings sharing the same genes and being raised in the same environment, each sibling’s response to the environment can be shaped differently. There are several proposed theories to explain this divergence. One proposed idea is that siblings tend to gravitate towards different hobbies and activities in an effort to stand out to their parents.

With the good comes the bad— or as most siblings would attest to, the annoying.

Living with a person that constantly interferes with one’s routine can be infuriating. For siblings, there isn’t much of a choice in regards to who they must spend their formative years with, which can be hard to accept for some.

“My brother and I have a very chaotic relationship,” junior Micaela O’Rourke said. “We bicker and have normal conversations, but when we both have a lot of energy, we are the most annoying people in the world.”

However, there are ways to benefit from the differences between siblings. For one, individuals with siblings are able to have a greater understanding of their limits and abilities. When their patience is constantly tested, whether that be from chasing after a sibling that stole their clothes or having to meticulously explain a homework question over and over again, individuals learn to remain calm. According to the Washington Post, having a younger sibling can help regulate the health of a family. The introduction of a new family member encourages the family to reflect on their eating habits and improve their lifestyle.

National Siblings Day is marked on April 10. Siblings Day was first celebrated in 1995, and established by Claudia Evart of New York, who had two siblings that died young. Evart created the day in conjunction with her organization, the Siblings Day Foundation, which aims to reunite separated siblings.

“The ceremony represents the relationship between the siblings as the sister vows to take care of the brother and the brother vows to protect the sister,” sophomore Akanksha Tiberwala said.