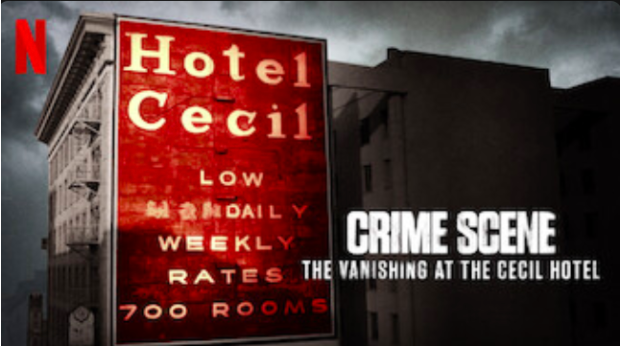 Crimes and their mysteries fascinate a wide range of watchers, one reason, according to Health, is because many enjoy exploring the dark spots of humanity. These documentaries are accessible on a wide range of websites.

Recently, Netflix has been adding more crime stories to its site, some of the top being “American Murder: The Family Next Door”, “Crime Scene: The Vanishing At Cecil Hotel”, “Don’t F**k With Cats: Hunting An Internet Killer” and “Abducted in Plain Sight”.

“I think crime documentaries are intriguing because it’s so cool to see the process of how the detectives try and solve the crimes,” sophomore Emily Sridhar said. “It can also be fun trying to solve [the mysteries] along with them.”

“American Murder: The Family Next Door”

Set in 2018, Frederick, Colorado, Shannan Watts and her daughters suddenly go missing. Chris Watts, her husband, and their neighbors were unable to contact Shannan. Soon, 911 is called, and they search their house. There were no signs of distress so according to protocol, the police interrogated Shannan’s family and friends.

During the lie detector test, everyone said they had no idea where Shannan and her daughters were. However, when the results came in, they discovered something much more gruesome and horrifying than anybody had expected. The movie is documented through videos of police interrogations and Shannan Watts’ personal life. It also features a shocking ending and leaves viewers surprised yet satisfied.

“‘American Murder’ is such a well thought out and explained [movie],” Sridhar said. “I really did not expect it to end to be so horrific. But, I was glad the police were able to solve the crime.”

The death of Elisa Lam has puzzled authorities since the case first opened on Jan 13, 2013; theories range from substance abuse to suicide to cold-blooded murder. Lam was staying in Los Angeles at the Cecil Hotel. She was very open about her whereabouts on social media. However, one day she stopped posting, calling her parents or even coming to the hotel. Soon enough, the police declared her missing and began their investigation to find her.

The only evidence the LAPD had were the hotel’s security tapes. Lam was acting possessed, in the elevator. It seems as though she was talking to someone but no one was there and she would leave and enter the elevator several times. Suddenly, she just vanished.

Some believe there was a ghost and some think she was just plain crazy. This went on for a while until people started getting sick and noticed that their drinking water was murky. Health officials came in and discovered something insane.

“After I finished this documentary, I began to search up on the internet possible death scenarios she could’ve gone through,” sophomore Rachel Jeong said. “I feel like the story of her murder or suicide would have been very interesting and odd.”

According to BBC News, director Joe Berlinger created this documentary because he believed the story had changed as people talked about it. He wanted a solid cover of “what actually happened” for those who were curious. However, Berlinger and the LAPD did not have enough evidence to solve this mystery.

Luke Magnotta’s crimes were extremely horrifying, peculiar and nothing like what the police had seen before. Magnotta’s crime sprees began with posting a video of himself killing two kittens online. Soon after, Magnotta killed a man, dismembered him and sent his body parts to separate locations.

This is when the police realized he had turned into a full-fledged murderer. As a result, an international manhunt for him began. This documentary depicts the operations behind the search for Magnotta, shedding light on how investigators find criminals.

“Don’t F with Cats is my favorite true-crime documentary series,” Sridhar said. “It was so well put together and there were tons of twists and turns.”

While it may seem like every other kidnapping documentary at first, “Abducted in Plain Sight” has one aspect that does not show up often. Twelve-year-old Jan Broberg was taken by someone much older than her. At first, it was willingly, Broberg got into the car and thought she was going to a museum. As time passed, she realized something much more horrific was happening.

Fortunately, she was returned home alive, and once she became much older, her sisters and parents were interviewed. Broberg told the whole start to end of what had happened. This is a very unique style of a crime documentary because the victim is able to explain the story without the media making it up using evidence.

Some other crime documentaries that were added to Netflix are “Amanda Knox”, “Night Stalker” and “Why Did You Kill Me?”. “Amanda Knox” is mostly about Knox and her killings whereas, “

Night Stalker” is about two detectives trying to catch a serial killer on the loose. “Why Did You Kill Me?”, however, is different because it is about trying to catch the killer of a certain girl through social media.

“A good crime doc should have multiple points of view so that you can kind of make your own decisions about what you believe,” Jeong said. “I also like when it’s a little bit fast-paced and there are unexpected twists because it keeps you excited.”