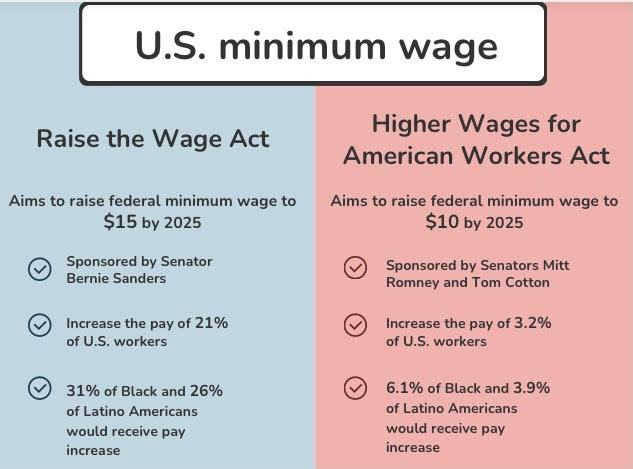 Two separate bills have the potential of changing the federal minimum wage from 2021 to 2025, Source: Economic Policy Institute

An increased federal minimum wage has been one of the goals of progressive legislators for many years. Some economists believe a gradual rise of the minimum wage over a set number of years would be beneficial not only for the economy but also for the working class. However, a rise in the minimum wage is not as simple as giving workers more money.

“Wages are one of the main costs for any business,” AP Economics teacher Joseph Clement said. “Any increase in wages makes it harder on a business to produce things and keep people employed.”

Additionally, another bill sponsored by Senators Mitt Romney and Tom Cotton was introduced in February. The Higher Wages for American Workers Act of 2021, or more commonly known as the Romney-Cotton Bill, aims for a similar target as the Raise the Wage Act, except its end goal is $10 per hour by 2025 as minimum wage as opposed to $15. The controversy behind the Romney-Cotton bill is the bill’s requirement of businesses to use E-verify, a system that checks the legal status of employees, which has caused a full veto of the bill by the Democrats.

“In the [Northern Virginia area], the minimum wage is slightly higher because we’re the political center of the United States,” sophomore Nidhi Padakanti said. “The raise to $10 [rather than $15] seems more feasible because raising it higher might strain the economy.”

“Everything is more remote now [because of the pandemic], so the minimum wage is more flexible,” Padakanti said. “There are even people working for companies in different states, which results in a fluctuation of minimum wage.”

A controversy surrounding minimum wage involves the pay of minorities, specifically people of color. According to Vox, people of color, especially women of color, are disproportionately paid just above or at minimum wage and are often the first people to be laid off. Some economists believe that increasing the federal minimum wage would ultimately lead to people of color earning a salary that they can comfortably live off of.

Though Congress has yet to announce or resume a change of the federal minimum wage, people have not stayed silent. Progressives all over social media have voiced their opinions and demanded change be done to let the American worker live comfortably.

“The main argument against raising the minimum wage is if you raise it too high, companies will either have to raise their prices, or they will have to hire fewer people,” Clement said. “Raising [the minimum wage] is aimed at helping the most vulnerable, lowest-wage workers. It’s finding the ‘sweet spot’ of a wage that allows people to meet at least their basic needs while leaving companies enough money to keep all of their employees without having to raise prices too much. That’s the trick…and it’s not easy.”