To All the Boys that Have Hurt Us Before 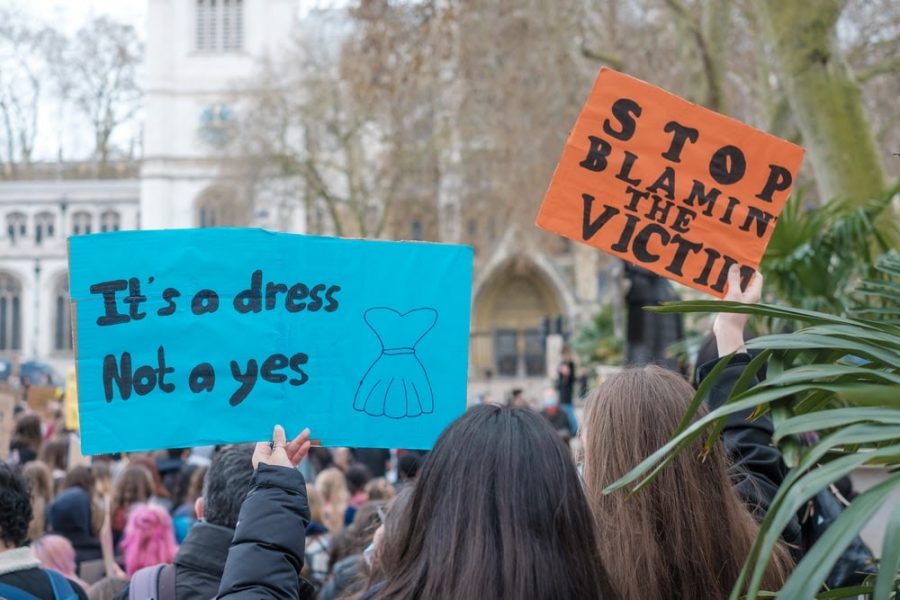 In the aftermath of British marketing executive Sarah Everard’s murder, protesters hold up signs decrying the violence inflicted upon women.

“I support women’s rights, but I’m not a feminist.”

The number of times I have heard this statement is appalling. The very definition of a feminist is someone who supports equal rights for all people, yet the label of a feminist is one that many people shy away from. The reality is, our society is more fearful of the so-called “radicalism” of feminists than the true dangers women face every day when they go to public places, get into a car or as Sarah Everard did one tragic night, walk home.

The kidnapping and murdering of Sarah Everard on March 3, a British marketing executive, sent shock waves throughout Britain. The public was horrified to realize that even a cautious and rule-abiding woman was not safe. The story garnered another level of attention when it was discovered that Everard’s killer was a highly regarded police officer, a man whose very job is to keep others safe. Perhaps most heartbreaking of all is the reality that Sarah Everard’s story is not an isolated incident, but the story of thousands of women in Britain and around the world.

“The whole [Sarah Everard case] just makes me question how serious [the public is] when we deal with issues like this one and why we aren’t enforcing new measures to bring down the number of similar cases,” sophomore Sudeep Orvoy said.

Teenagers, specifically those in the 14 to 17-year range, are the age group most likely to be sexually assaulted in America. This statistic combined with the horror stories I hear on a daily basis are enough to stop me from walking by myself at night.

Just last week, I spent ten minutes trying to build up the courage to bring my trash to the curb at night. Much like crossing a street, I looked both ways, trying to grasp a 360-degree view before I ran to the trash can, my heart beating faster the further I went from home. Would anyone hear me if I screamed? I did make it back home in one piece, but the cloud of panic and terror that encapsulated me as I made my trip to the trash can left a scar.

In the wake of Everard’s murder, countless people took to social media to raise awareness of the abuse endured by women. Yet a significant group—teenage boys—remained quiet.

“Specifically on social media, many boys have been silent about this issue because they don’t understand how serious the issue is and how important it is to spread awareness,” Orvoy said. “They view their platform as fit to only post about sports or music.”

Beyond social media, I discovered that boys were also hesitant in simply talking about the murder. Something was holding them back from fully expressing themselves, whether that be fear of striking controversy or discomfort in speaking of such an atrocious crime. Whatever the case may be, the silence was deafening.

“I think it’s really ignorant and quite sad how some boys can never sympathize with the suffering and trauma that others have felt and gone through,” Orvoy said.

In our society’s current state, there will inevitably be more Sarah Everards. However, the reactions to these events and the measures taken to prevent such events are controllable. The greatest gift that boys—the men of tomorrow—can offer is to listen to women and project themselves as people who will support and defend women.

The pain that women have to endure directly stems from the people who choose to belittle them. Regardless of boys’ past actions, there is always a chance to change, for change can only emerge from them. There are women that boys will meet one day in the future, women that are yet to be born. Do not introduce them to the prejudice experienced by generations before. Do not be another boy who hurts girls like me.