Cheerleaders perform in the spotlight 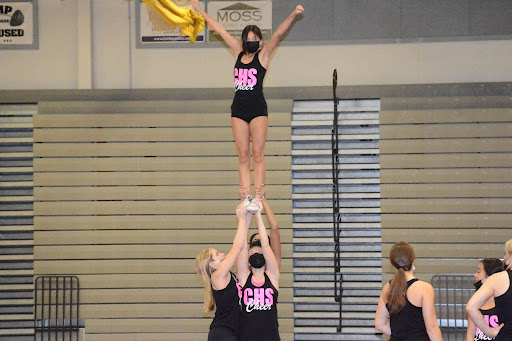 With a new freshman team, cheerleaders have returned to the competition mat to put their skills to the test. Since COVID-19 protocols have been lightened, teams are now able to resume more close-contact stunts, such as baskets, where stunt groups throw a flyer into the air and catch them before they fall.

“Last year, specifically, there were no competitions. It was a year where everyone just focused on getting their skills,” junior Micaela Bravo said. “We’re very hard workers, and we’re stronger than you think.”

“I think our tumbling is really good for where we’re at,” JV competition captain and sophomore McKenzy Hopkins said. “It helps me get all my aggression out and makes it something really cool. In my opinion, that’s probably the best part. It’s also really fun, with my team cheering me on, [telling me] ‘you can do it, you got it,’ and pushing me every step of the way.”

A team-oriented sport, cheer requires a certain degree of trust between all members. For example, an elite stunt such as the pyramid requires three stunt groups to support a flyer in the air.

“[Given] where our team is now, any of our bases or backs would gladly break their arm to catch our flyer so she doesn’t have to get injured,” Hopkins said. “I know one stunt group literally dove face first to catch one of their flyers.”

To bond with new and returning team members, cheerleaders often hang out together outside of school, whether by having sleepovers, meeting up for food or playing volleyball at a park. With 18 cheerleaders in total, the varsity team has seven fewer members than the previous season.

“We have a smaller team compared to last year, but we still try to build the team camaraderie overall,” varsity coach Lauren Barden said. “This year, we’re really focusing on rebuilding. Having so many new members can be challenging because you have to learn to work together with a completely new team each year. It’s a sisterhood.”

Teams perform at school events and compete with other schools at the district, regional and state levels. The JV team has an invitational competition coming up on Oct. 23 at Yorktown High School. Varsity district finals are at South Lakes High School on Oct. 20, and regionals for the JV and freshman teams are on Oct. 30 at Centreville High School.

“Everyone on the team is really determined to win,” Hopkins said. “I think the coaches definitely push us so that when competition comes, we’ll be happy with our results and not think about what we could have done better.”

After last year’s COVID-19 protocols were lightened, the JV and varsity teams are now able to fully participate in competitions and perform the routines they’ve practiced.

“By the time we go on the competition mat to perform, I get so overwhelmed with how proud and happy I am to be able to express myself on the mat,” Bravo said. “I would break out in tears every single competition. I just love that feeling, being proud of something that I’ve accomplished and what the team has accomplished.”