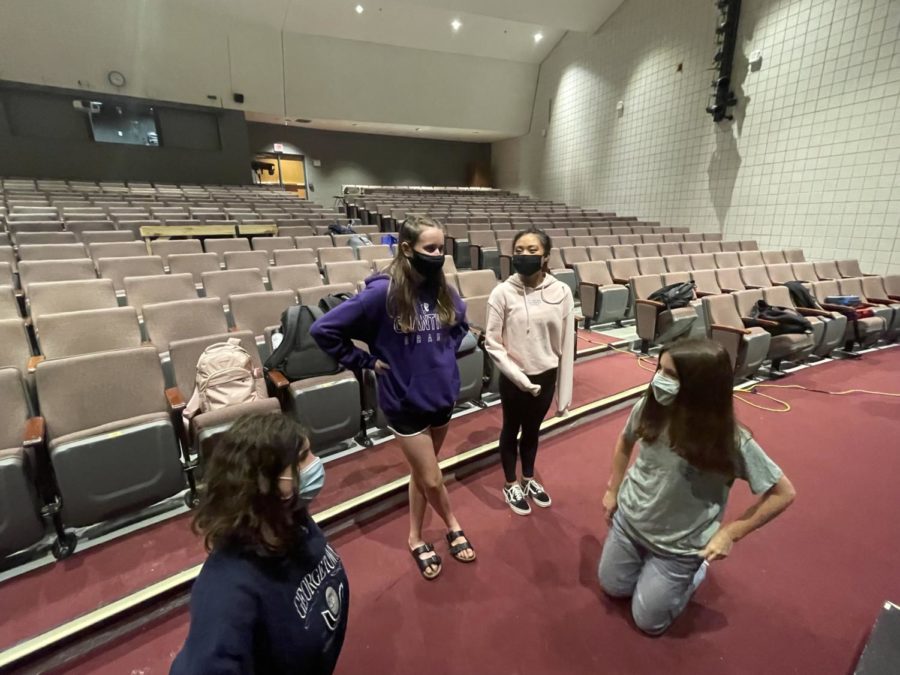 Senior Edie Obenberger, junior Lucy Sherrier, senior Kaela Francisco and junior Anna Dimauta discuss meeting Kacey Caliba while the rest of the ensemble prepares the stage for rehearsal on Sept. 21, in the auditorium.

Fairies, ogres and 90s pop culture take the main stage in the play “She Kills Monsters,” where teenage Agnes mourns her deceased sister, Tilly, by exploring the world of Dungeons and Dragons (D&D). According to Chantilly Drama, D&D leads Agnes on a journey toward answers about Tilly’s death.

“The content makes this show different,” junior ensemble member Megan Rudacille said. “It’s very different from the children’s shows [the drama department used to do], which I’ve mostly been in.”

Unlike other shows, the cast has to take extra precautions during rehearsals. Due to the introduction of weapon-like props into the show, the cast takes extra steps such as strictly enforcing careful storage of props in order to prevent injury.

“Rehearsals can be structured and busy but I like it [when] we [get to] chill out for a few minutes,”  junior ensemble member Lucy Sherrier said.

While the cast takes the stage, the production team including director, head of hair and makeup, head of lighting and more helps the show progress behind the scenes. The director, theater arts teacher Shannon Spicer, is in charge of making sure the rehearsals and final production run smoothly all around. The head of lighting and the head of hair and makeup focus their efforts on polishing the appearance of the show as a whole.

“I’m excited to perform with [the cast] because going back to performing on stage in front of a live audience is important to me,” junior Alex Lesnik, cast as Evil Gabbi, said.

While most cast and crew are either students or staff, they have also brought in outside help to assist in rehearsals. Due to the nature of the show, Kasey Caliba, an expert in fight scenes, has joined their team to work on action sequences.

“The way [Caliba] works and his attitude is so inspiring because he has such amazing feedback and he’s so supportive,” Lesnik said. “If you do something correctly he will get super excited and it’s so much fun to just watch even if I’m not a part of it.”

Due to COVID-19, the cast and crew continue to take safety precautions by wearing face shields during the entirety of the show. They opted for these instead of masks in order to better display facial expressions and mannerisms during the show.

“It does get pretty difficult [wearing masks] especially in the theater and acting community because we focus mainly on facial and body expressions,” Lesnik said. “I like that we started working with [face shields] so people can still see our [faces].”

While students on the main cast are committed to specific roles, those in the ensemble take on different roles such as puppeteers, monsters, demons and other creatures. The drama team has also introduced new props to incorporate into their ensemble, including a five-headed dragon prop.

“We have a couple of dragons [but] I like the five-headed the most [because] I might get [the chance] to use it,” Sherrier said.

Unlike past productions such as “Jack & Jill & the Beanstalk ” and “Charlie & the Chocolate Factory,” “She Kills Monsters” is meant for older audiences. Due to flashing lights, loud noises, depictions of bullying of LGBTQ+ youth and some mild language, the production has been rated for audiences 13 years or older.

“The original script had a homophobic slur in it,” Rudacille said. “We decided to remove the language because you can get the same point across without using that kind of language.”

Opening night is Oct. 13 at 7 p.m. and they will also perform on Oct. 14, 15 and 16 at 7 p.m. in the auditorium. Tickets can be purchased online or at the door of the show. With all the cast and crew working hard to create an amazing show, they hope to start the year strong.

“Rehearsing can sometimes be a little bit difficult because we have to work out a bunch of the problems,” Sherrier said. “But I’m looking forward to it because I love [when people come see] the shows.”