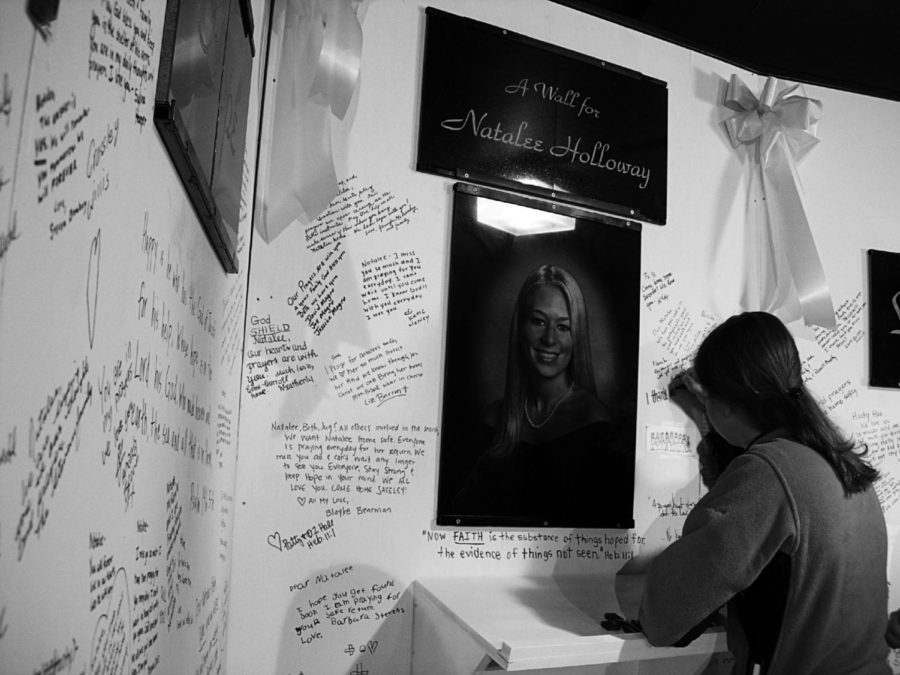 On June 10, 2005, a young lady signs a memorial wall for Natalee Holloway, less than two weeks after her disappearance. This case is another example of the White Woman Syndrome.

Hundreds of thousands of Americans are classified as “missing” by police enforcement at any given time. However, only a small percentage of these individuals gain media attention. This prompts some observers to speculate that missing persons with specific qualities, white and female, are more likely to attract the spotlight than others.

According to the National Missing and Unidentified Persons Systems, 90,000 people are missing in the United States at any given time. Out of these, white women and girls who are missing, namely stereotypically attractive blondes who come from privileged backgrounds are more likely to be covered in the media than missing persons of other demographics. In the 2004 journalism conference, “Unity: Journalists of Color,” journalist Gwen Ifill discussed this concept and coined it as the “White Woman Syndrome,” which term became a nationally recognized phenomenon.

News outlets, such as the New York Times and the Los Angeles Times, continue to emphasize reports on cases where the victim is a white woman, underrepresenting and disregarding the cases impacting women of color. Gabby Petito, a woman who went missing on Sept. 11 after taking a cross-country vacation with her fiance, became the focus of a countrywide search when she didn’t come home.

The massive online frenzy that has developed over Gabby Petito’s case is due in part to her ethnicity and gender, according to the Insider, true-crime experts, who noted that blacks, indigenous peoples, and other people of color rarely receive the same attention as Petito. According to Mitu, at least nine bodies have been found since the case which shows how little coverage they received.

“This dynamic cannot be changed until society as a whole begins to dismantle the institutional racial and social hierarchy,” senior Samarra Rodriguez said. “It cannot change until people begin to actively educate themselves by participating in the anti-racist movement.”

According to a 2016 survey conducted by Northwestern Law, Black individuals were substantially underrepresented in missing person coverage when compared to the number of FBI cases involving Black persons. The public debate over this syndrome has revealed that police enforcement and the media, which are supposed to equally represent all genders and races, are in fact not impartial.

According to the Black & Missing Foundation, out of the reported missing cases in the United States, 40 percent are persons of color. This shows how little widespread attention these people get and that coverage of white and POC victims is unequal.

“The power social media holds today is indescribable,” senior Aaliyah Wilkes said. “The coverage white women would receive is of greater value compared to anyone that is a person of color when it comes to missing person cases. With the excessive media attention that missing white women receive, it becomes a very large topic of interest, while many people of color face the same issue with little to no attention.”

Reporters can surely expand their coverage, focusing more on equality and reporting all cases without racial disparities.

“The media coverage of Gabby Petito’s case is a perfect example of performative activism,” senior Johanna Luke said. “I do not think we are making progress with this syndrome since people believe she got media coverage due to her influential power in the media, while in reality, it is because of the color of her skin”.

The fervor with which the syndrome has been covered is similarly reflected in social media, where users have discussed and argued the matter on various social media platforms while poring over Petito’s videos and photographs. This emphasis on the narratives of white women who go missing or are killed in the major demographic makeup of most news agencies overshadows the women of color who go missing.

“The media likes to tell the story of the innocent, pretty white woman being a victim of terrible crimes,” Samarra said. “That kind of story is profitable, it attracts viewers.”