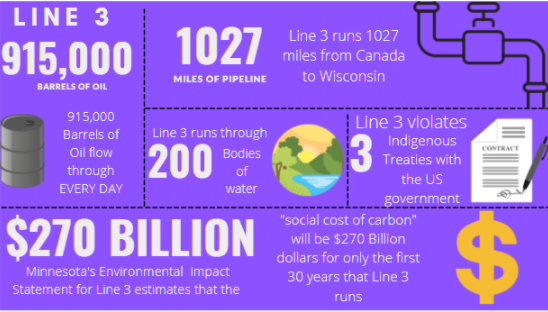 Nine-hundred thousand barrels of oil flow through Line 3 each day, with a carbon footprint equivalent to the daily CO₂ emissions of 16 to 18 million cars— this is the climate emergency that Line 3 operation poses each year it runs.

Line 3, which went into effect on Oct. 1, is a highly controversial crude oil pipeline that runs from Alberta, Canada to Superior, Wisconsin and has been under reconstruction since 2014 by Enbridge Inc. Multiple environmental activism groups and Indigenous rights groups highly oppose Line 3 due to its massive potential harm to the climate and indigenous culture.

Enbridge itself claims that since Line 3 is an expansion of a previous line that has corroded since being built in the 1960s, a rebuild is necessary. This is more than just a rebuild, though, since the new line increases oil flow by more than double its original 370,000 barrels. This increased capacity is part of an effort to increase productivity and stability in the oil industry, but its costs seem to outweigh its supposed benefits.

“It’s disheartening with all the information about climate change that we are still pursuing fossil fuel and granting subsidies to fossil fuel companies,” AP environmental science teacher Anne Fenton said. “We have documented evidence that shows what the impacts of fossil fuels and carbon dioxide are. We should be moving away from using fossil fuels.”

According to Stop Line 3, the pipeline crosses 200 bodies of water, and its carbon footprint will exceed that of the entire state of Minnesota. In addition, Line 3 runs through several treaty lands of indigenous tribes, such as the Anishaabe people of the Great Lakes, threatening their inalienable right to clean water and producing viable crops due to inevitable pipeline leaks. Since 2014, indigenous people have rallied against the line, using their bodies to block construction and prevent the threat against their water and land.

“Indigenous people who are upset over this have every right to be upset, because it’s breaking so many treaties and [that land] is their land, not ours,” senior Alyssa Dausch said. “To me, [this is] definitely a climate issue, but I think that [the violation of] indigenous rights really stands out— the fact that we’re doing things that we’re not allowed to be doing on someone else’s land is disgusting.”

Other reasons for protesting against Line 3 are based on oil pipelines’ notoriety for leaking, causing damage to the environment. A leak could be devastating for indigenous people who live off the land, as it contaminates their water, food and air. Crude oil is notorious for being one of the dirtiest oils, so any oil that makes it into water or soil could render the land unfit for growing crops.

Furthermore, the line’s carbon emissions would exacerbate climate change across the U.S. According to the Environmental Impact Statement for Line 3, the social cost of carbon released by Line 3 is $270 billion for every 30 years the line runs. Since Enbridge’s lines have run for over 50 years before, it’s likely that this cost will increase in the years to come.

“I think the protests are definitely justified, especially coming from the [indigenous] people who it would be [directly] affecting negatively,” leader of the Students for Environmental Activism club and senior Lili Malatinszky said. “[Line 3] would also affect all of us, [as] a negative impact on the environment affects us all.”

In addition to protests, Indigenous people and climate activists are calling for direct action from President Biden, following the precedent Biden set by blocking a permit for the construction of Keystone XL, another large and potentially harmful oil pipeline, in June.

“I think that President Biden should be putting forth and encouraging legislation that would stop any future oil pipelines from being allowed to go forth,” Fenton said.

There are several ways students themselves can help halt Line 3. Writing letters to government officials, donating to Indigenous rights groups or climate organizations like Earthjustice, and spreading awareness are all ways to contribute to the movement.

“Allies of Indigenous people should be helping [and] supporting the tribes with resources to help them to continue to protest,” Dausch said. “[We should also] protest ourselves, share information and write to representatives so that government action can actually happen.”