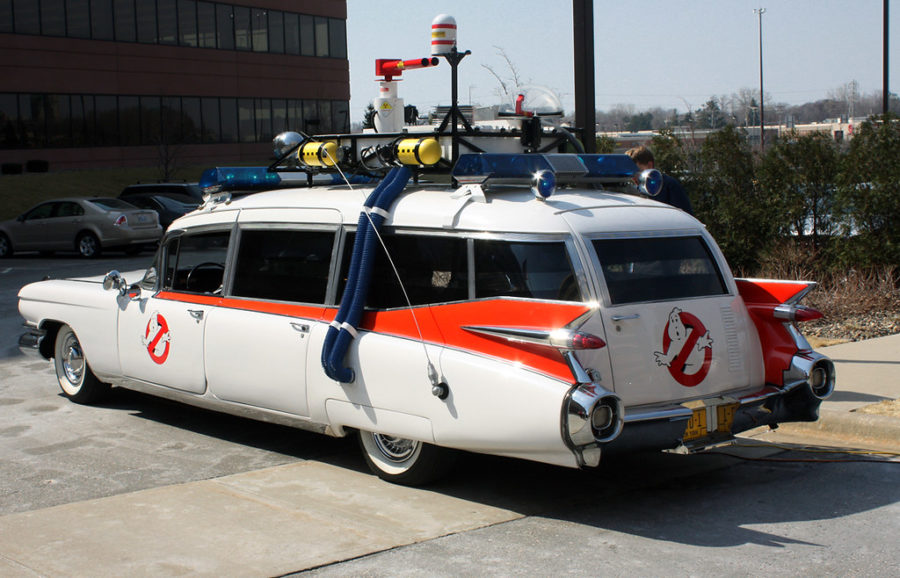 "Ghostbusters ECTO-1" by relux. is licensed under CC BY-SA 2.0

The updated ECTO-1, the car the Ghostbusters use, was spotted outside someone’s work on April 16, 2008. The original 1959 car was brought back for the 2009 Ghostbusters video game and will be used in the upcoming “Ghostbusters: Afterlife” movie according to a trailer released Dec. 9, 2019.

After nearly 40 years, the 1984 film “Ghostbusters” still remains prevalent in pop culture today. Its unique plot pits the power of science against supernatural forces, making the movie a classic fan favorite. Coming out on Nov. 19, the long awaited sequel “Ghostbusters: Afterlife” will have to find its own spin on what was already an unusual story.

“At the time there was nothing like ‘Ghostbusters’, people hunting ghosts was a new idea and the [special effects] were good for the time,” junior Micaela Bravo said.

“Ghostbusters” is about a group of scientists coming together to start a ghost hunting business, which spirals into the group having to stop Gozer, a god that tries to destroy the world. The film received critical acclaim, prompting the release of a sequel in 1989 and a remake in 2016.

At the time the movie was originally released, the special effects it used were groundbreaking. The effects allowed for the inclusion of awe-inducing ghosts with iconic and unique character designs, like Stay Puft, a marshmallow, humanoid-like monster that towers at about 100 feet tall.

A trailer released on July 27 shows “Ghostbusters: Afterlife” will be taking these classic monsters and updating their visual effects with more advanced technology. Along with special effects the new film will also be bringing back the original actors for this film while also giving new roles that are based on the original, as two of the main characters are the grandchildren of Egon, one of the original Ghostbusters.

Despite its fame, the Ghostbusters franchise has yet to produce a sequel that is on par with the original. In order to live up to the quality of the film, some believe “Ghostbusters: Afterlife” needs to seriously deliver through the script.

“[The quality of ‘Ghostbusters: Afterlife’] all comes down to the writing,” math teacher John King said. “If [the characters are] well-written, then it’ll be good.”

When it came to writing characters, the original Ghostbusters movie was the best in the franchise. The chemistry the actors had, along with their great dialogue, made these characters seem like people who could live in the real world. The characters each had their own personality that bounced off the others’, giving quick characterization along with comedy. The audience empathized with the characters just by watching dialog scenes.

“[Some memorable character interactions in the original were in] the early scenes when Ray is more of a serious science guy, while Peter is messing with the equipment and making Ray more nervous,” English teacher Micheal Murphy said.

However, it is still unknown if “Ghostbusters: Afterlife” will continue this dynamic. Changing the character dynamics in the new film could be the unique take on the franchise that the film needs. A trailer released on Dec. 9, 2019 shows that the new film will be based in an unknown town compared to the original, which was in New York City. This new setting will give the chance for a new character dynamic.

“They’ll probably try to maintain what was in the original, but they’ve got to push it to try something different,” King said.

Whether the distant sequel chooses to recreate the dynamic in the past or make a new one, they need to remember why the original film has remained popular for nearly 40 years. In terms of effective character work, none of the three movies the Ghostbusters franchise has made has lived up to the quality of the first movie. The new Ghostbusters movie has high expectations that it needs to live up to when it releases Nov. 19 and based on what’s been shown so far, the new Ghostbusters has the potential to be a 4 star movie.

“If [‘Ghostbusters: Afterlife’] meets every expectation and even goes a bit above and beyond, then it can be a smash hit,” Bravo said.