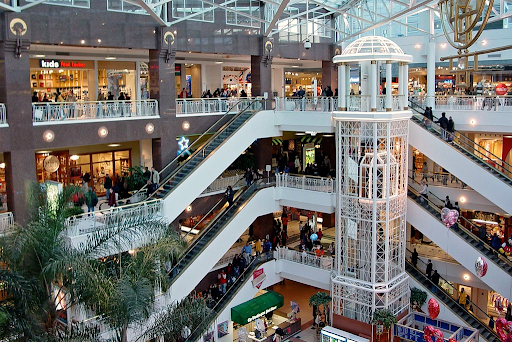 Consumers shop at Pentagon City Mall ahead of Valentine’s Day. While excessive spending creates negative impact, these purchases fuel the retail industry. Photo by Benjamin Schumin under CC BY 2.0.

While watching videos on TikTok, teens are susceptible to being influenced by the massive hauls, shopping challenges and excessive wealth displayed through videos on the app.

Influences such as TikTok and Instagram contribute to the societal infatuation with “add to cart.” Excessive spending practices are a result of consumerism, which occurs when an individual is  obsessed with the acquisition of goods and services. In today’s society, consumerism often showcases one’s privilege and wealth compared to others.

“Thorstein Veblen, [an American economist], wrote about pecuniary emulation around the turn of the 20th century,” economics teacher Joseph Clement said. “It’s a fancy-pants way of saying, ‘I want what that person has.’”

According to Digital Commerce, online retail sales grew by 32.4% in 2020 due to the surge of online purchases during the pandemic. In addition, overall retail and grocery sales increased by 23.3%, as reported by Investopedia. However, the materialism that follows increased spending in retail also leads to higher debt levels. According to Experian, with consumers more willing to make bigger purchases, they are encouraged to take out more loans to finance their purchases. In addition, this practice contributed to the record-breaking collective $14.9 trillion American consumers had in debt at the end of 2020.

“Consumerism is a really difficult habit for people to come out of, especially once one starts spending,” junior and president of the Financial Literacy Club Nidhi Padakanti said.

With the average consumer purchasing 60% more in 2014 than they did in 2000, the Pew Research Center recorded 62% of all adults using social media in 2014. MarketingDive explains how 90% of individuals buy products from companies they follow on social networks.

In the 21st century, consumerism has greatly expanded with the creation of filter bubbles, which are online environments that provide information on what the user wants to see, based on their profile and click behavior. According to the Medium, the use of filter bubbles leads to excessive spending, as consumers are exponentially advertised to, after a single click to an online shop or a like on a product.

“The idea of consumerism is nothing new,” Clement said. “What is new is consumerism in the digital age where filter bubbles [influence] what we buy.”

Social media has allowed customers to shop a brand’s products virtually. Instagram’s shopping feature allows consumers to buy products directly from posts, encouraging the purchase of goods. These same sites use filter bubbles to predict the goods a certain individual is likely to buy.

“Social media has a really big effect on consumerism,” Padakanti said. “If you see a commercial for something, and if everybody else has it, then you want to buy it.”

Online trends such as $1,000 SHEIN clothing hauls have not only ravaged today’s spending habits, but simultaneously worsened the fast fashion issue surrounding the world, according to TheGuardian. The past few decades demonstrate the variability of trends going in and out of style. Influencers, including social media moguls, athletes, models and actors, are frequently paid millions of dollars for endorsements where they proclaim a specific brand or product as a favorite and encourage their legions of followers to purchase them. According to Deloitte, this relatively new form of advertising is impactful; as social media grows, consumers will continue to spend proportionally. Users can be mindful when using social media by being consciously aware of who they follow online and checking to see if a certain post is a genuine upload by the account, or labeled as an advertisement.

“My main advice to combat this addictive trend is to cut back on the amount of time we all spend online, and that goes for me and other adults as well,” Clement said.

According to The World Counts, consumerism accounts for the overuse of 70% of Earth’s natural resources. In the past decade, the “global middle class,” or the number of active consumers, rose to over 2 billion individuals. The increased demand for goods such as electronics, transportation, furniture and clothing have greatly diminished the Earth’s resources. For example, over 1,800 gallons of water are needed for the production of a single pair of cotton jeans.

“Consumerism can drag away [attention] from important sustainable consumption issues,” Padakanti said. “The random [acquisition of goods] can be harmful to the environment.”

Factories are encouraged to expand output, causing the increase of carbon emissions that accelerate climate change. This byproduct of air pollution contributes to the increased air pollutants that pose a major health threat, according to the United Nations. According to National Geographic, the current rate of consumerism is unsustainable because byproducts of production, including factories and waste, will lead to additional depletion of resources. Substances like oil and wastewater, as well as plastic waste, are dumped into oceans. According to Biological Diversity, there are up to 51 million pieces of pollution in the world’s oceans.

According to the European Commission, consumerism is projected to negatively affect 5 billion people by 2030. One method to reduce excessive consumption is to recycle products. This solution is applicable to both individual consumers and influencers whose actions and posts are likely to impact public opinion. According to Springer, consuming less also results in long-term satisfaction rather than off impulse purchases.

Thrifting, the use of second-hand products, mitigates the impact of consumerism by decreasing the environmental waste that excessive production creates. In addition to thrifting, other solutions are to control shopping trips and repair items that are out of use rather than buy new ones.

According to the American Psychological Association, these methods can not only improve self control, it can also help implement good finance habits and decrease excessive spending. Additionally, the second-hand clothing market was valued at $28 billion in 2019, and is expected to grow to $64 billion by 2024, as reported by Vox. Thrifting apparel consists of consumers purchasing second-hand goods, thereby recycling the clothes and reducing the environmental impact of fashion.