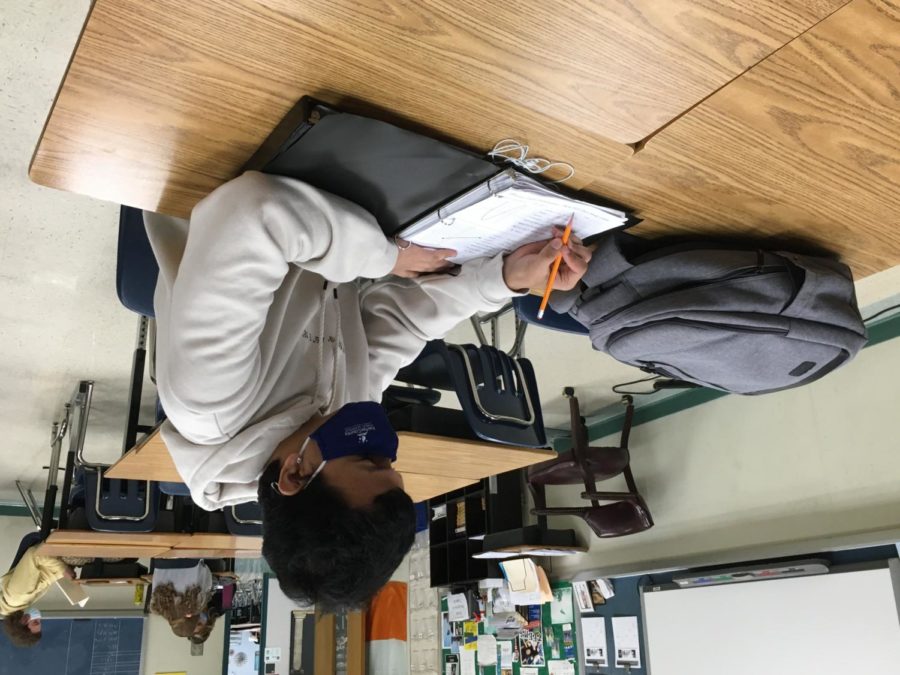 One of the few important parts of time management is setting up a personal schedule, or “to-do” list, because it allows students to stay organized, as well as keep track of what has been done and what needs to be done.

“It’s all about how you structure it really,” freshman Andrew Fox said. “If I have a lower grade in a certain class, then I’ll most likely focus on that class, and leave the others for later. If I begin to fall behind in a class, it’s raised on my priority list.”

Fox also uses Google Calendar to keep track of what he has completed, what needs to be completed, and due dates.

“I’m able to sort my assignments into categories, as well as into classes, so I’m never disorganized,” Fox said.

Students stated that they use forms of audible stimulants to help them focus, such as music, podcasts and audiobooks. According to Healthline, a study in 2019 suggests that listening to music can activate the “reward centers” in the brain, motivating you to learn new information.

“If I choose to listen to music while working, I try to listen to songs without lyrics,” Fox said. “It’s a lot less distracting than lyrical music.”

When tests are coming up, another topic students sometimes struggle with is studying. Many try to study but end up losing focus after a short period of time, which leads to them giving up and doing something else. One tip would be to study in shorter bursts, while making sure you take breaks to recharge.

“I also tend to study for only 20-30 minutes every day, just to remind myself of the information, since doing all of the studying in one night never helps,” Fox said.

One issue many seniors have been facing has been balancing school work and college applications, which has caused them to turn school work in late, as well as lose track of time. The Common App makes balancing a bit easier because colleges usually have the same requirement. It is advised that students re-use what they can, and ask for help if it is needed, while making sure they keep due dates in mind or on a schedule to ensure that the fine line between school work and college work isn’t crossed.

Many students still make time for tasks outside of their schoolwork, participating in a variety of extracurricular activities. Students can balance both school and extracurriculars using multiple methods, such as utilizing resources like tutoring services and planning their time wisely, keeping times such as what time school ends and practice starts in mind, so students can try and complete work in that timeframe.

“Usually, I try to get as much [homework] done as I can before and after [marching band] practice,” Kidd said. “Of course, I can’t do much during practice, but I love being in the marching band, so I’ll do my best to make time for it.”

Studies have shown students who have met with an advisor or counselor have shown greatly increased rates of productivity and well-developed time management skills, due to advisors assisting students in creating a proper schedule. A study conducted in 2014 has shown that two critical factors that contribute to student retention is for an academic advisor to show both knowledge and concern.

“No matter what, students should make their schedule fit,” Kidd said. “ Don’t follow someone else, find your own style [of time management], stick with it, and you’ll always be on time.”