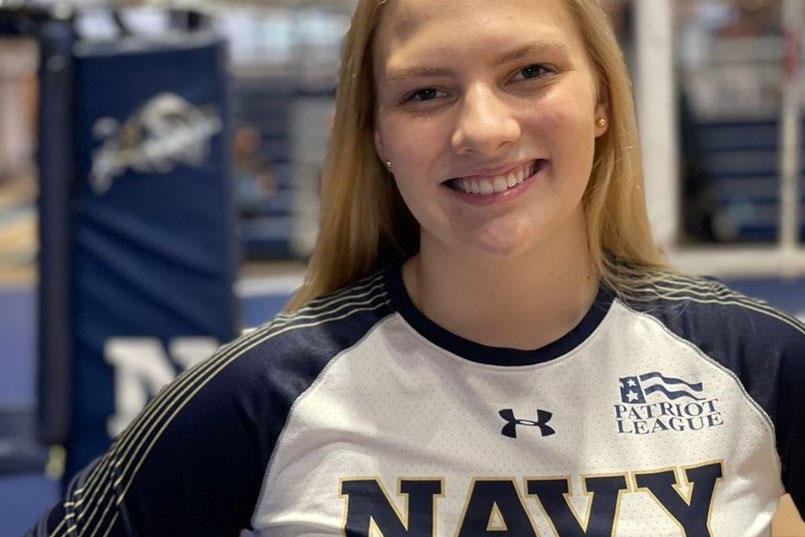 Senior Lainey Feighery attends an official visit to the Naval Academy on Feb. 25 after being recruited for volleyball.

They’re here. My dream school. They finally came to watch. I can’t mess up. This is my only shot—these are just a few of the thoughts that go through the heads of student-athletes with dreams of playing their sport at the collegiate level.

According to the NCAA, the average probability of a high school athlete playing in college is approximately 7%. This probability varies across sports, from 12.65% in lacrosse to 3.8% in volleyball, due to factors such as available spots on the team and the popularity of the sport as a whole. At CHS, some seniors were able to make this collegiate dream come true in different ways.

Typically, a student-athlete will first research schools they are interested in playing for and create highlight films to send to head coaches of said schools. Players often reach out to coaches through emails with stats and invite them to attend any upcoming events to give the coach an opportunity to see their skill in person.

Another way of doing this is attending a school’s ID camp, which allows a prospect to showcase themselves through training and scrimmages directly in front of the coaches at the school’s campus. If offered a spot on the roster, the player may verbally commit to the school.

The process differs for every athlete, where some may commit as early as freshman or sophomore year, others may commit during senior year.

For senior Even Sikra, who is committed to the College of William & Mary for gymnastics (NCAA Division 1), the path to recruitment was not smooth.

“The process for me was very stressful and took a lot of time,” Sikra said. “Due to COVID-19, I relied on YouTube videos and recording my skills more than ever. However, I wasn’t getting as much recognition as I thought I would. My teammates who were more qualified got to go on more recruiting trips and had more opportunities for college, so it [was] hard to keep pushing on but it all worked out in the end.”

“My recruiting process was a little unusual compared to my teammates,” Utterback said. “I never considered playing lacrosse in college, so I never attended college showcases, camps or reached out to schools I had an interest in like most people do. My recruiting happened through tournaments I played in with my club team during the summer and fall. I was still seen by many coaches at tournaments and was able to commit in the end.”

The final step in the recruiting process is the commitment decision, where student-athletes must let all interested coaches know where they have decided to go. There are many factors that may influence a player’s decision such as the level of competition and post-graduate opportunities. For senior Owen Pierce, who is committed to the College of William & Mary for baseball, the division of the school was not a priority.

“For me, the things I wanted in a school were high academics, under six hours away from home, and somewhere I could get playing time,” Pierce said. “Those other factors were way more impactful in my decision than the school’s division.”

Depending on the school, there can be many benefits of being a student-athlete, including post-graduate opportunities, such as having alumni support programs in which alumni of the team help current members find internships and job opportunities. Senior Lainey Feighery is committed to the U.S. Naval Academy (Division 1) for volleyball.

“The level of play was important because I wanted to play at the highest level possible,” Feighery said. “The level, although important, was not the end-all-be-all; the academy offers the equivalent of a $400,000 education, job security, security clearance and so much more. The defining factor was what would help me the most post-graduation.”

For those navigating the college recruiting process, senior Lauren Seisky, who will play softball for Muhlenberg College in Pennsylvania (Division III), emphasizes that there’s more to it than just having skill. According to USA Today High School Sports, most coaches look for mentally and physically tough prospects. They look for focused, aggressive competitors who display effort, fearlessness, and confidence.

“You have been preparing for this moment your entire athletic career, so trusting your skills and knowing what you’re capable of is going to help a lot,” Siesky said. “Also, coaches care about how well you do in school, how good of a teammate you are, your attitude after messing up in a game and even how you treat your parents.”

Even if not recruited by a coach, there is still a chance that student-athletes can play their sport at the varsity college level. Division I schools have certain amounts of scholarship money they can give to prospects, and oftentimes coaches may not have enough spots for every player they would like to recruit. In this case, coaches can offer a walk-on offer to a player, where a player is on the team without any form of athletic financial aid. There are three different types of walk-ons, preferred, recruited, and unrecruited.

Preferred walk-ons is the highest status, and are guaranteed a spot on the team upon admission. They receive the same amount of support in the admissions process as scholarship athletes.

Recruited walk-ons are those whose positions are not guaranteed upon admission, and the coach may expect them to red-shirt their first year. NCAA athletes have four years of eligibility to play, and red-shirting essentially means to be on the team but not use a year of eligibility by not playing in games or events. This saves a year of eligibility for when the player wants to use it, typically later or after college when they are more developed at the sport.

Unrecruited walk-ons, the least common of all three, must get into the school without any support from the coach, and would have to attend an open tryout after admission. Whatever the case, there is always an opportunity for a student-athlete to continue their sport in college.

“The best advice that I can give is just keep emailing and keep all your options open,” Feighery said. “Don’t close any door too soon; you never know what might happen.”