Pro: Phone use should be restricted in school 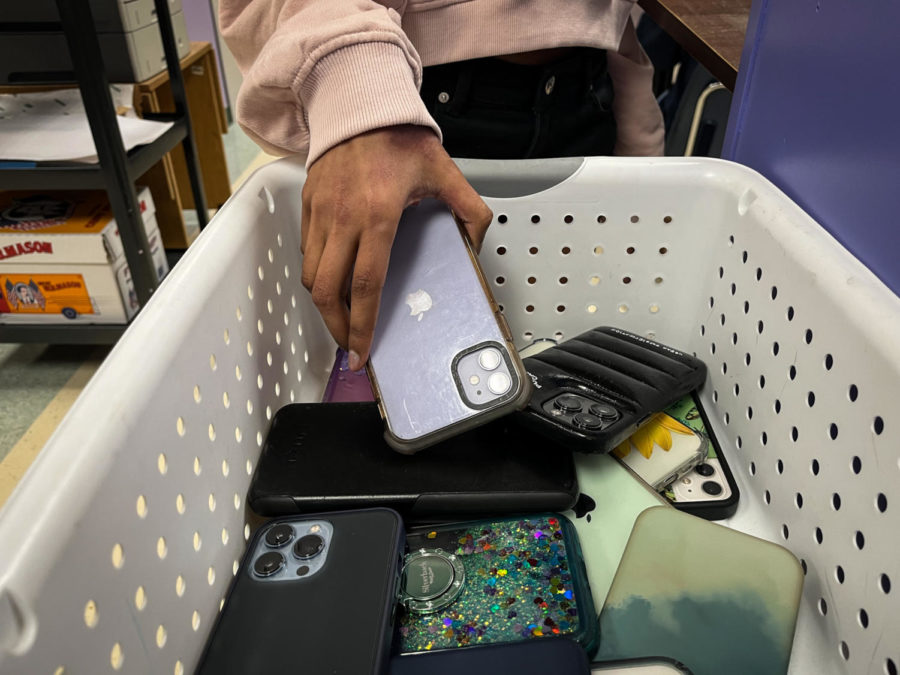 A student puts away her phone before class. This policy is employed in Ms. Schweppes’ classroom.

The fluorescent lights on the ceiling illuminate the students that populate the history classroom: half of them are listening to the teacher explain the significance of Marbury v. Madison while the other half are entranced by the rectangular screen of their portable device. Having a phone at school is the norm, with 95% of students reporting owning a smartphone or having access to one, according to Pew Research Center.

However, in April, Herndon High School, a fellow Fairfax County school, banned the use of phones and headphones in classrooms. The ban was put into place as a result of what the principal called an all-time high in phone use. Following more than a year of online school, the problem is no longer masked by a digital webcam.

“[Cell phone use] used to be more common in less rigorous classes,” senior Madison Vuong said. “However, after the pandemic, I’ve noticed an increase in the number of people on their phones in hard classes as well. There are a couple of students who I’ve seen playing games, mindlessly using [social media] and watching movies and shows throughout an entire class. It’s definitely a bigger problem now since students are more attached to their phones.”

“When you talk about a developing adolescent brain that struggles with impulse control, the prefrontal cortex isn’t fully developed,” Clement said. “You can’t not look at your phone if you get a notification. You only have a limited amount of focus, so if you’re constantly trying to flip focus between school and the phone, the phone is going to win every time because it is made to be addictive.”

Additionally, easy access to phones allows for rampant cheating. According to a study conducted by Common Sense in 2009, 35% of teens report cheating at least once with cell phones.

“If you’re going to spend so much time trying to figure out how to cheat, the time would be better spent learning how to study for the test, and learning the material as opposed to cheating through your phone and finding ways [get past teacher’s cheating] blocks,” social studies teacher Stacey Schweppe said. “[Students have] tried to figure out how to circumvent that and find new ways of cheating, so it’s just a constant game of who’s going to outduel the other one.”

Oftentimes, phone use in classrooms is defended on the basis of it serving as a way to link students to the plethora of enriching information available via the internet. However, due to the FCPSOn policy, all students in Fairfax County have access to laptops with which they can connect to the internet. Consequently, everything that can be done on a phone that is positive for education can also be done on the laptop.

“We are already given laptops to do work on and that’s enough screen time,” Vuong said. “Without phones, students would be able to focus more on their schoolwork and maybe actually try to get to know their classmates.”

According to Pew Research Center, 43% of teens reported often or sometimes using their phones to avoid interacting with people.

“If taking away phones could push kids into interacting, something our generation desperately needs, I don’t see why it shouldn’t be supported,” Vuong said.

More leadership and guidance from the administration calling for teachers to be harsher on phone use would be beneficial. In my experience, many teachers are no longer bothered by a student who blatantly uses their phone in class, which creates a classroom environment in which students think it is acceptable to use their devices during a lecture.

“Administration should push for teachers to keep phones away during class and to set certain times in the middle of class for a phone break or something of the sort,” Vuong said. “[My government class] this year has a place where we put our phones during class, and it’s honestly one of the most engaging classes I’ve ever been in. It might also just be the people in the class, but this phone restriction wouldn’t hurt anyone as we’re in school to learn.”

Following the ban in Herndon, a proposal was introduced that called for not allowing phones throughout the day in elementary and middle schools and not allowing phones during any instructional time in high schools. The school board is set to vote on May 12.

Excessive phone use in class is an issue school-wide. Banning the use of phones in class will enhance in-school learning and therefore reduce the amount of work students need to do at home. Additionally, it will allow students a much-needed break from the phones that consume their lives. 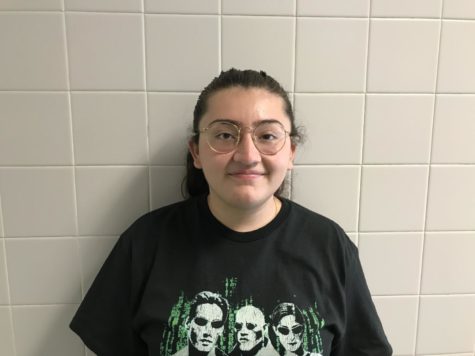 Sharon Santos is a senior and this is her first year at the Purple Tide. Sharon enjoys watching movies and TV shows. In her free time, she can be found...

Con: Students should be allowed to use phones in school 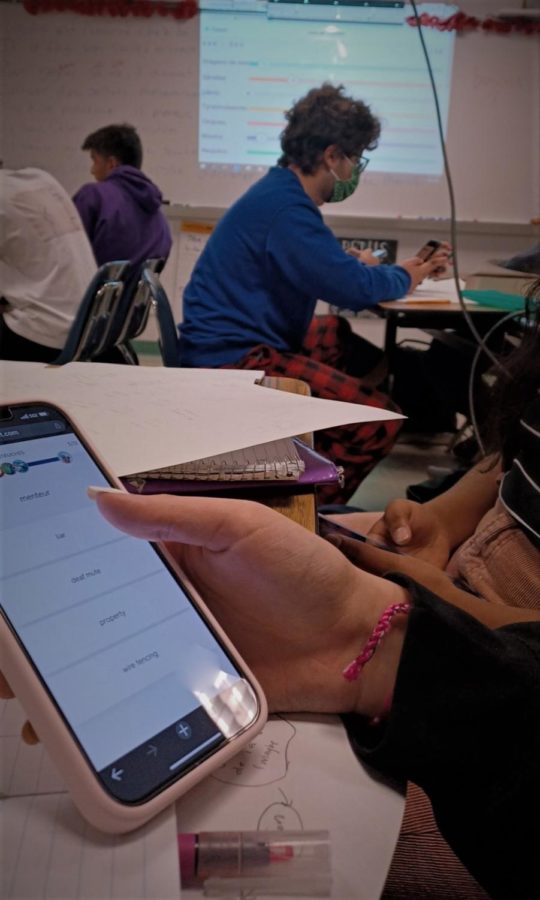 Students are practicing their French vocabulary on Quizlet Live; a collaborative app used for learning and reviewing educational material.

Among the sounds of students shuffling around and backpacks zipping open, freshman Manis Shad turns on her phone to join Quizlet Live to practice her French vocabulary. Students eagerly collaborate with their groups to win first place as excitement fills the room. After a thrilling couple of minutes, a groan overcomes most of the class; however, a cluster of students cheer once they finish the last question before the rest of the teams.

Over the past 50 years, technology, particularly phones, have heavily influenced the way we live our lives, from getting our news from social media to using various apps for work or school. Many people claim that students also use their phones for cheating and are a distraction from their curriculum, however, there are many advantages to using cell phones for educational benefit.

According to a poll taken in the cafeteria on April 28, 94 out of 103 students have used their cellphones in class to complete classwork provided by their teacher.

Despite the integration of cell phones into our daily lives, in April, Herndon High School (HHS) prohibited the usage of phones in classrooms due to an all-time high in reported phone usage, and overall distraction in class according to WTOP. Despite this, it would be considerably hard to ban cell-phones. Especially since so many students use their phones to learn, which indicates they’re prioritizing and focusing on their academia.

Two weeks after HHS’s announcement, Fairfax County school board members proposed an alteration to the 2021-2022 student rights and responsibilities manual, which currently states that students can only use their phones if they have the teacher’s permission. The new policy states high school students can only use their phones before and after the first bell, between classes and during lunch.

“I allow my students to use their phones in class with my permission,” Spanish teacher James Kotula said. “As long as [students] are doing what they’re supposed to be doing, I see no problem with phones in school.”

According to Family Education , allowing students to carry cell phones gives parents the ability to call their child in case of emergencies. If a student falls ill or forgets something at home, a family member can be on the way to help them through a phone call or text message.

The policy change at Herndon High School means that parents who want to contact their child at school would have to call the main office, according to WUSA9. In times of an emergency, such an arrangement can be inefficient.

“If I need to contact my parents it would be a lot harder,” Shad said. “Especially foreigner parents who would have a harder time understanding. It would just make everyone frustrated.”

Another factor to consider is that many students use their phones for more than just contacting their parents; they also use various apps to further their academics.

In 2020, there were over 500,000 educational apps according to the Educational App store. Apps like Quizlet, Duolingo, Khan Academy, and other study tools are often used by students to help manage academics and schoolwork.

Furthermore, according to the Student Tutor Organization, planner apps like calendars promote healthy habits, including organization and time management skills.

In Fairfax County Public Schools, schools provide students with laptops. However, some students claim that the computers are slow and inefficient.

“I use my phone when I need to access things like SIS or Quizlet,” Shad said. “Using my phone for school makes everything faster and more efficient rather than going on my computer.” 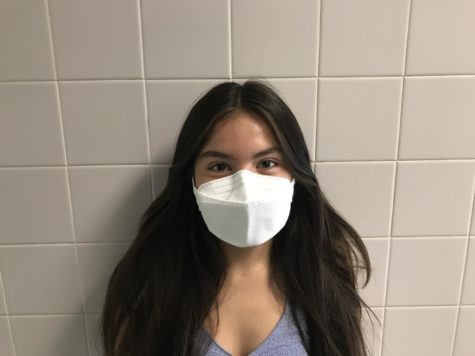 Gabby Walter-Ortuño is a freshman and in her first year on the Purple tide. Gabby loves to learn new things and help people. In her free time she enjoys...