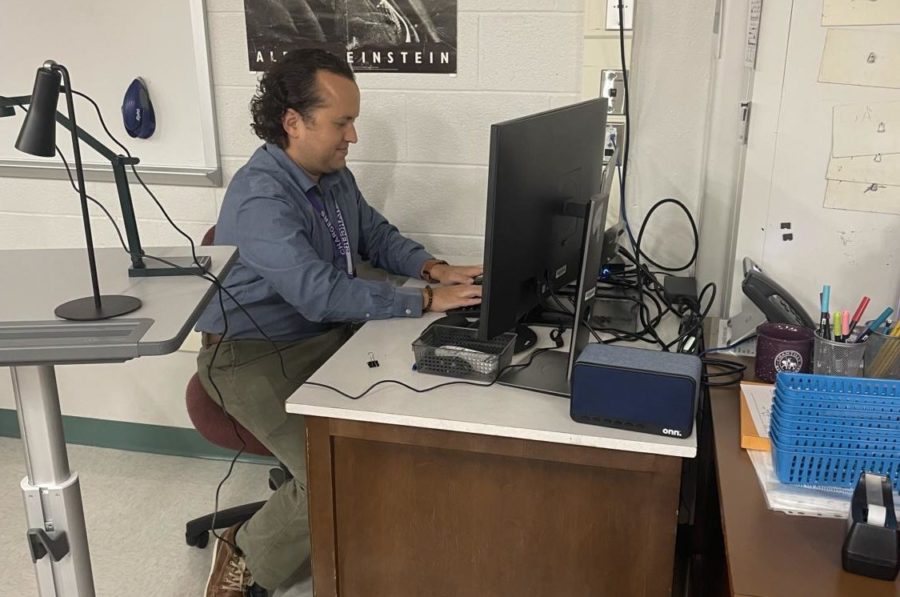 First year physics teacher Thomas Usry gets work done after school, taking the steps he needs to get ready for classes the next day.

What made you want to teach physics?

What got me interested in physics is when I took my first physics class in high school, as most people do; but I took it as an 11th grader instead of a 12th grader, which was unusual from where I came from. During that time I had a pretty good teacher, she got me really interested in physics, and it just sort of clicked with me. That’s what made me love it as a subject. I majored in it in college just thinking, ‘I’ll figure out what I want to do with it.’ While I was studying at the University of Pittsburgh, I did some tutoring and that made me realize I could combine my interest in physics with my new love for teaching and helping people out. And that’s how it came to be.

You said physics wasn’t normal where you were from. So where are you from?

A small town outside of Pittsburgh called Leechburg. Growing up in a very small town, my graduating class was like 70 students, so that’s why there were pretty much just the core academic programs. Everybody tended to just do the same stuff, but I got into physics a little bit early.

What was your experience with high school science? How is it different now?

I would say my high school science was very hands-on. We did a lot of activities, a lot of labs and cool applications. I remember there was a day when we took the bass drum outside and stood very far away. We were trying to find a difference between when we saw the stick hit the drum and when we heard the sound, so we were able to calculate the speed of sound. I try to do that with my students too. I try to give them cool hands-on experiences that help them more in the curriculum.

What are some of your past teaching experiences?

My first year teaching I taught in five different rooms. I was not only a moving teacher, but I moved every single period for all five of my different classes. That was probably the highlight, getting started on a rough foot. Also, moving between a couple of different schools has been a little bit challenging getting to know how the schools work. I like to teach the classes I’m teaching here, which is a lower level class called active physics, that’s even lower than the standard physics, and I teach AP physics. I really like the two spectrums there.

How do you adjust to working at a new school?

Difficultly, on the teacher’s side there are a lot of different things to read through, the different handbooks and stuff like that, so it’s really hard to get to know the different procedures at a new school. Getting to know all the different people is a challenge too. I tend to be pretty slow with names. So I just try to get myself involved and help out a little bit here and there as best they can and try to meet everybody and figure out who I’m going to be working with.

What are some of your favorite things about teaching?

The cool thing about seeing kids working on something really challenging and doing it well is knowing that you had an impact on them. I would say that’s probably the number one thing, especially with physics, where people can be very intimidated by problem solving. I would say if I had a student who isn’t great with word problems, analytical skills and algebra, then by the end of the year they’ve improved those skills and grown an interest in physics—I think that’s the best.

How do you split your time teaching and your free time?

Not very well, so far, when getting adjusted to the new school. I’ve spent a lot of nights getting stuff ready and trying to make sure that I’m doing everything the school wants me to do, as well as being prepared to teach and check through papers. Once I get the swing of things, I try to make sure I show up a little earlier to get stuff ready for the day and stay a little bit later to finish up anything I couldn’t finish during my planning.