“I worked pretty hard on my BeReals; I took pride in them,” Jocuns said. “You have to sacrifice a little bit of the reality for a more rewarding experience.”

Altered and refined social media images create heightened expectations on the viewer’s end. A 2019 National Library of Medicine study found a correlation between time spent on social media, eating disorders and body image issues. This dissatisfaction in the viewer’s own body perception stems from the idealized and largely edited body types that thrive online.

“You’ve got all sorts of fake bodies out there,” English teacher Bobby Nelson said. “For guys, it’s these macho, masculine expectations which are rising. For young ladies, the body shape changes all the time.”

Additionally, there has been a steady rise of influencers who display lavish lifestyles, gaining viewers because they have a seemingly perfect life, according to The Short Horn. This glamorization leads to unhealthy comparisons of the viewer’s own habits to the “highlight reel” of behaviors visible on social media. Following the surge in social media platforms, adolescent depressive episodes increased by 68%, as reported by the American Psychological Association.

“People can paint a perfect picture on their social media, and it can make people feel insecure,” Felder said. “I’ve felt insecure looking at other people’s social media before, whether it was about my body image or just the way that I live my life.”

Managing expectations is key to healthy use of social media. According to MindWise, the idealized images portrayed online can serve as helpful motivation when viewed as aspirations to strive for rather than standards to meet. An understanding and acknowledgment of the airbrushed nature of online content can aid in adjusting expectations for reality.

“Knowing that everyone around you is editing their photos, especially to post on their pageant accounts, is sort of a reinforcement: I don’t have to be perfect in real life, because no one else around me is,” Felder said.

Despite the detriments of refined personas, consuming or creating an idealized feed can foster its own set of benefits. Building authentic connections and limiting followed accounts to those trustworthy and uplifting can transform social media into a source of joy, according to MIT News. Users can also harness their platforms for a greater good, amplifying causes they support and spreading awareness or information, according to Kubbco. When users project positivity online and consume content with a grain of salt, the possibilities for social media as an instrument for improvement are virtually endless.

“Social media gives you another platform where you can project yourself and your self image to everyone else more than having to actually be here in person,” Jocuns said. “Whoever you want to be seen with, whatever actions you do, if that’s what you’re striving to do online, I think there’s really nothing wrong with that–that’s just self expression.” 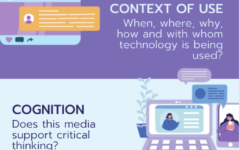 From constantly flipping water bottles to doing the “Juju on that Beat” dance, students have been eagerly trying out a vast variety of social medi...