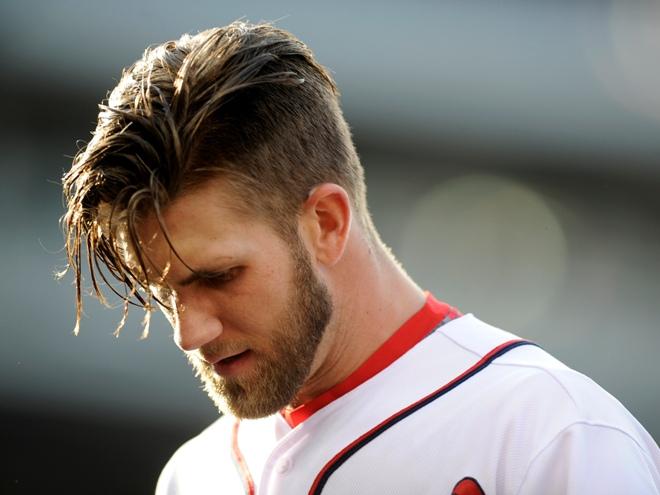 What Happened to the Nationals?

On Sept. 9, the Mets beat The Nationals for the third straight game, completing a sweep. The Nationals fell seven games behind the Mets for first place in the National League East. Since then, they have completely fallen out of contention for the NL East title.  It’s hard to believe now, but the Nats were once projected by experts to be one of the best, if not the best, team in baseball at the beginning of the season. So what went wrong?

“The bullpen, especially the closer, have really lost a lot of games for us this season,” sophomore Patrick Collins said.

According to ESPN, Nats’ bullpen pitchers this season have an earned run average (ERA) of 3.51, good for just 13th place in the MLB. Since Jonathan Papelbon was acquired days before the trade deadline, former closer Drew Storen struggled mightily, and a broken thumb suffered after angrily slamming a locker on Sept. 9 ended Storen’s season.

The Nationals’ bullpen is clearly a primary reason this season has been unsuccessful. Too many blown games have occurred that could have been wins with a quality bullpen. This offseason, the team should make an effort to shore up the bullpen in free agency and with trades.

An unexpected issue has been the starting rotation. After the offseason signing of Max Scherzer, the Nats rotation was touted as one of the best in the history of baseball.

However, just like everything else associated with the Nationals this year, nearly everything has gone wrong. Doug Fister was demoted to a long relief role because of his struggles in the rotation. Former top prospect Stephen Strasburg struggled with injuries and ineffectiveness all season. Lefty Gio Gonzalez’s season as a full-time starter has been the worst of his entire career. Even Scherzer and former ace Jordan Zimmermann have been weaker than in past seasons, and according to ESPN, Scherzer struggled in August with a 6.43 ERA.

“[Manager] Matt Williams [is the reason for the poor season]. I think he’s lost a lot of games for the Nats this season,” freshman Charlie Cavanagh said.

Williams was hired for the 2014 season and led the Nationals to the 2014 NL East division title before losing to the Giants in the NLDS, winning the NL Manager of the Year award in the process. This season, however, he has been highly criticized by baseball analysts.

The criticisms against Williams are well deserved. His shortcomings appear to be a major reason for the Nats’ struggles. For the most part, Williams has been criticized for choosing unfit relief pitchers based on the situations of the games.

An example of calls by Williams that many have second-guessed was the handling of the bullpen on Sept. 1. The Nationals were playing the St. Louis Cardinals, who were tied at five heading into the bottom of the ninth inning, and St. Louis came up to bat. Williams called on reliever Casey Janssen, who pitched to a 7.20 ERA the month before, instead of using star closer Jonathan Papelbon. Janssen gave up a three run home run to end the game, losing the game for the Nationals.

Another primary reason that the Nationals season has gone downhill is the various injuries suffered by team members. Outfielders Denard Span and Jayson Werth have missed much of the season, forcing rookie Michael A. Taylor into heavy usage. Taylor has occasionally hit well for the Nats, but he has also struck out 153 times in just 455 at bats as of Sept. 28, according to sportingcharts.com. Longtime Nationals corner infielder Ryan Zimmerman also missed over a month in the middle of the season with plantar fasciitis in his left foot and has been out since Sept. 8th with an oblique strain.
Several factors have caused the slump for the Nationals this season. They have already lost this season, but minor adjustments, a good offseason and better luck could lead to another playoff appearance next season.