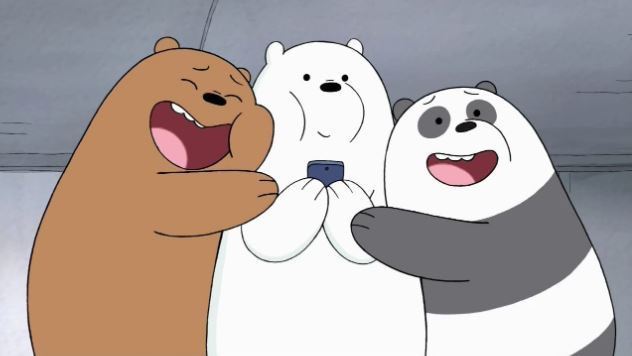 In the episode “Subway,” Grizzly (Eric Edelstein), Ice Bear (Demetri Martin) and Panda (Bobby Moynihan) rejoice after retrieving their phone that was lost on the track.

Taking place either in their cave or in the hip streets of San Francisco, “We Bare Bears” follows the day-to-day adventures of Grizzly, Panda and Ice Bear, three bears that try to vibe and thrive in a civilized, human world despite their awkwardness and naive abnormality. The show, created by Daniel Chong on Cartoon Network, toes along the edge between reality and fantasy and includes bursts of pop-culture references while keeping a light-hearted mood.

For senior Kristen Yoo, the show never fails to grab her attention with its representation of Korean culture due to the many Asian-American producers on the show.

“I love the moments in the show where the bears attempt to speak in Korean with Chloe, their best friend who is a young prodigy, and her parents because, as a Korean watching it, it’s so funny,” Yoo said.

The show also includes episodes that focus on the three bears as young cubs while they scavenge for food and look for someone to adopt their lost selves, captivating much of the audience with cuteness. “We Bare Bears” contains a total of four seasons and is available for streaming on Netflix, Cartoon Network, Hulu, YouTube TV and HBO Max.