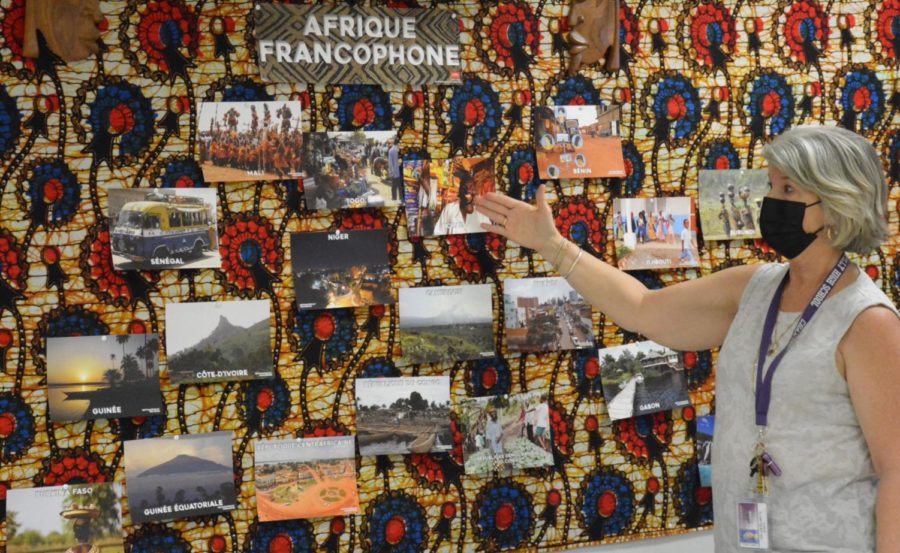 How are you feeling about Chantilly so far?

I like it a lot. I’m learning something new every day about different habits and traditions. I’m really excited about going to the [first football game]; I have students that are going to be singing and playing [there].

How did you develop a deep interest in French?

When I was 16, I took Spanish and French at the same time, and my French teacher was actually Mexican, married to an Italian. I thought [being multilingual] was just about the coolest thing in the world. I continued French through high school and college and then went to live there.

Did you teach in France?

I taught native English there for 12 years. Once, I took a group of 28 students to America and it was the first time that they had seen New York or Washington D.C. They lived with American families, and I remember one particular student [that] I took to Arlington to see the changing of the guard looked at me and said in perfect English, ‘Madam, I think I want to be an American.’ He thought the traditions here were so mind-boggling. These exchanges still continue: I get emails, short notes and messages through snail mail as well as the Internet and social media from former students in France, Senegal, Ethiopia [and other] places that I’ve taught.

What was your favorite country to teach in?

I loved them all. I loved Korea because it was so different from anything I’d ever seen. My dad had been in the war there, so it was a huge discovery for me when I went to teach at the demilitarized zone just outside Seoul. When I went to Ethiopia, it was also my first time in East Africa, and I taught high schoolers there. I had to go back to using chalk—it’s harder to write on a chalkboard with yellow where you can’t see it—but the challenges did not seem to thwart the students’ motivation to learn. Every place I’ve taught has been something that’s given me motivation myself, and it keeps my momentum going. Children all over the world [are] very much the same. I’ve taught students from 5 to 85 [years old]. The lessons are kind of similar, and my students teach me as much as I teach them.

What makes Chantilly different from other countries you’ve taught at?

It’s really unique that Chantilly has such a diversity of cultures. I think that having lived in other parts of the world, [the diversity] I see in my classroom is what I’ve had to [seek out], and here it’s coming to me. I haven’t been to India, but in some of my classes, I have Indian speakers who have learned French, and that’s their first modern language that they learn in India. There are different things that you learn [to] incorporate as you get to know students and what their needs are.

Donate to The Purple Tide
$535
$650
Contributed
Our Goal
Submitting donation...